What is the Difference between Soft Starter & Star Delta Starter (Y-Δ)?

Soft Starter and the star delta starter are two different types of motor starters. A motor starter is a device that safely starts and stops a motor & protects the machine from the huge starting inrush current. They also offer low voltage protection as well as overcurrent protection. That’s the reason we need to use motor starters.

Both of these starters use the technique of voltage reduction to reduce the starting current. Other than that, they are quite different based on every other feature. Before going into the list of differences between soft starter & star delta starter, let’s study them first a little bit. 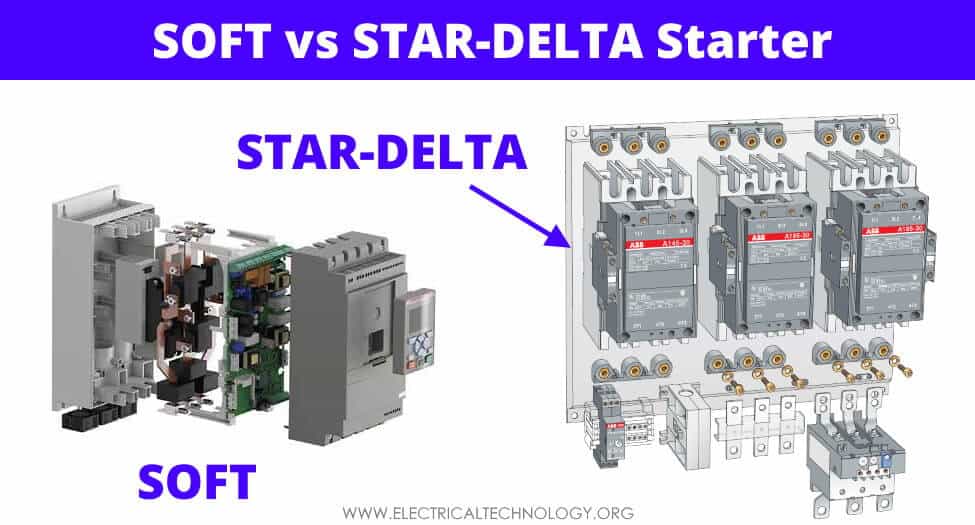 The Star-Delta starter aka Y-Δ or Wye-Delta Starter is the most common type of motor starter used in industries to safely start & stop large induction motors. It reduces the large starting current by reducing the voltage supplied to the motor.

As we know, the star connection reduces the phase voltage by 1/√3 which subsequently reduces the starting current. The motor’s winding at startup is connected in star configuration to reduce the inrush current. Once the motor picks up the speed, the windings are switched to delta configuration to resume the full voltage supply.

Its design is very simple & it is very cheap. But the downside is that there are more wire connections.

There is no flexibility in its starting characteristics such as the star connection allows 1/√3 of starting current which generates fixed starting torque that is 1/3 of the rated value.

Due to limited starting features, It can only be used for starting a motor in unloaded condition. & it has a fixed starting time which cannot be adjusted.

There is a mechanical jerk when the star connection is switched into the delta connection to resume the full voltage. You may know more about the differences between star and delta connection and STAR to Delta and vice versa transformation in the previous posts.

The soft starter is a motor starter made of semiconductors such as thyristors or SCR (silicon controlled rectifiers) to regulate the voltage supply to the motor. The voltage at startup is reduced to reduce the inrush current that can damage the motor windings. The voltage is gradually increased until it reaches rated speed. 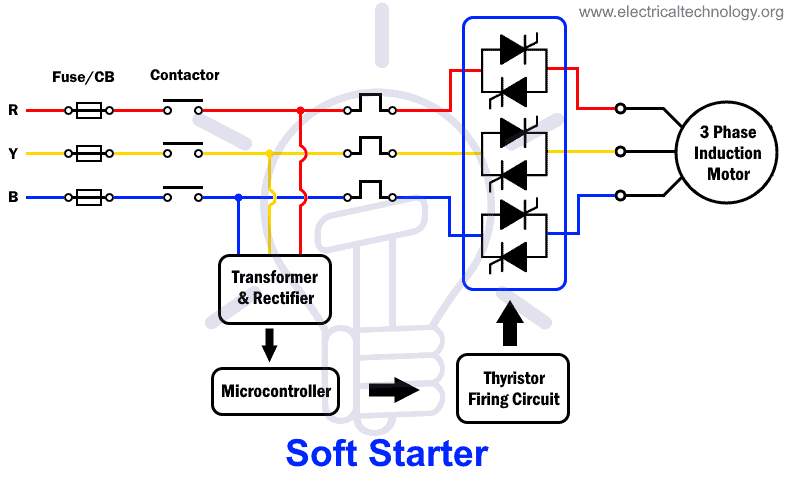 Soft starter allows us to control & gradually increase the voltage from 0% to 100%. Therefore, it offers flexibility in the starting characteristics. Whereas star-delta starter has a fixed voltage for starting that limits its flexibility.

The Low voltage at startup protects the motor from damage due to a high inrush current that could burn its windings. In star-delta, the star connection reduces the voltage as well as the starting current by factor 1/√3 which is still larger than the soft starter.

The soft starter smoothly increases the speed of the motor at startup while in star-delta starter, the swapping between star to delta connection suddenly increases the current & torque which causes a mechanical jerk in the machine.

The mechanical jerks which are absent in soft starter increases the mechanical life & reduces the maintenance schedule of the motor. while in star-delta, it is somewhat of a concern to inspect the motor once in a while.

The smooth startup & controlled acceleration of the soft starter makes it a perfect candidate to be used in conveyor, belt & pulley system and cranes.

It can handle both loaded & unloaded conditions during the startup of a motor. It also allows us to adjust the starting time of the motor.

Since it offers a gradual & smooth increase in speed & it is more reliable, it can be used for heavy motor such as in cranes, conveyor belts, etc.

Since the costs of solid-state devices have lowered significantly in the past decade, the soft starter although it is slightly expensive than a star-delta starter, is used for large electric motors in applications that require frequent start & stop. Not to mention, it also offers many other useful features such as adjustable starting torque, starting time, soft stop feature & no power loss. It can handle variable load conditions. The lack of any moving parts increases the lifetime of the starter & the smooth motor operation prolongs its life & requires less maintenance.