In electrical and electronics engineering students must come in contact with various electronic components while creating a project such as a microcontroller, sensor, transducer, actuator, transmitter, receiver, etc. The term sensor and transducer is usually used interchangeably and they are considered one and the same thing.

In general, transducer works on the principle of transduction. Transduction is the process of conversion of one form of energy into another form. While a sensor can only sense changes in any physical quantity.

Transducers, sensors and actuators are the backbones of instrumentation. They are used to measure and translate real-world quantities into the electrical and digital world. 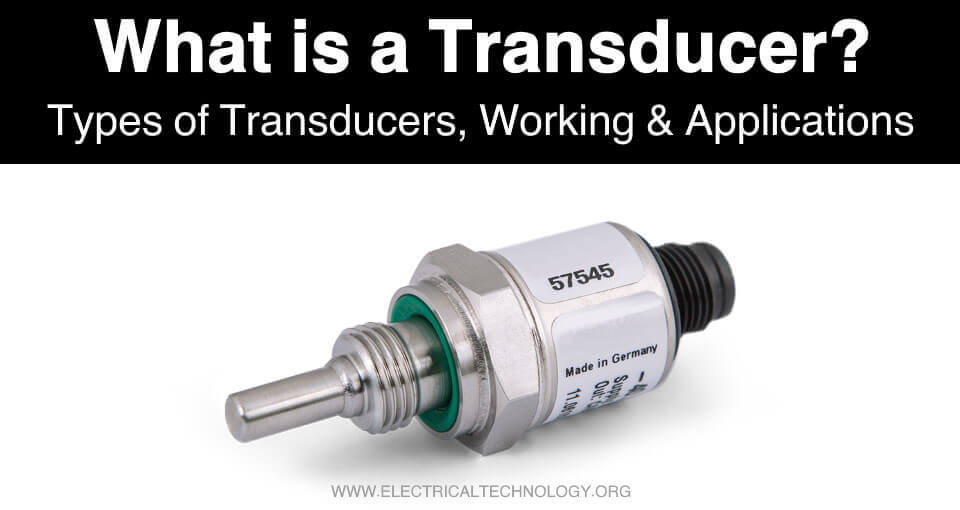 What is a Transducer? 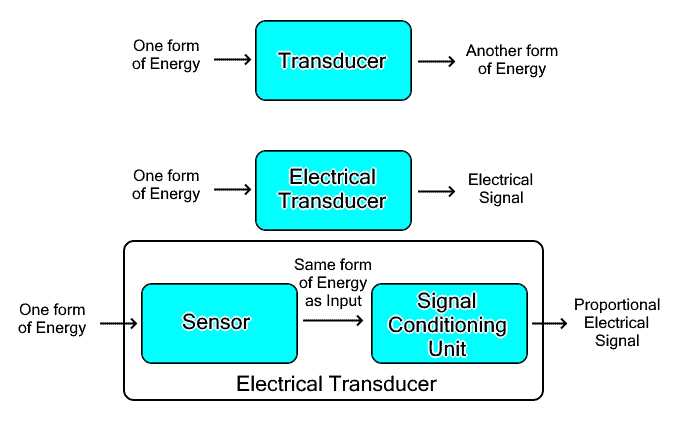 The output of a transducer is proportional to the input or measured quantity applied to it. For instance, temperature, pressure, light, sound, position, and other quantities are converted into their proportional electrical signal using a transducer such as a thermometer, piezoelectric transducer, potentiometer, microphone, etc.

Parts and Working of Transducer

A transducer is generally made of two main parts.

The sensor unit is responsible for detecting any change in the physical quantity. The output of the sensing unit is non-electrical in nature.

The transduction unit converts the sensor’s output into an electrical signal that is proportional to the input quantity.

There are various advantages of converting physical quantities into electrical signals. Some of them are mentioned below:

There are different types of transducers that are classified based on various characteristics.

Based on Power Source

The active Transducer does not require an external power source to work. It utilizes the energy from the physical change itself to operate and produce a proportional electrical signal. Various physical quantities can be converted into an electrical signals. 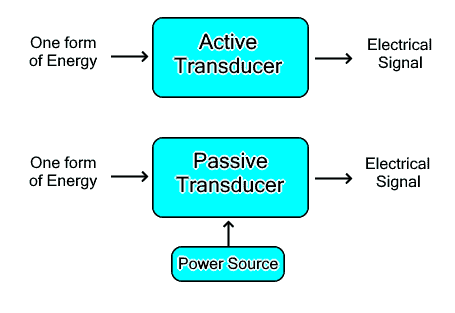 A passive transducer requires an external power source to operate. It converts physical quantity into proportional resistance, capacitance, or inductance that is further converted into an electrical signal using an external power source. Therefore, the transducers that work on these principles are passive transducers. Such as potentiometer vary the resistance with a change in position or length that is converted into voltage and current using a power supply.

Based on the Output Conversion

A digital transducer converts a physical quantity into an electrical signal that is digital in nature i.e. the output signal is discrete and non-continuous both in magnitude and time. The output signal is in binary form “1” and “0” called bits. It is used for interfacing the transducer directly with a microcontroller.

A transducer is a device that converts any other form of energy or physical quantity into an electrical signal such as a thermistor, microphone, etc. 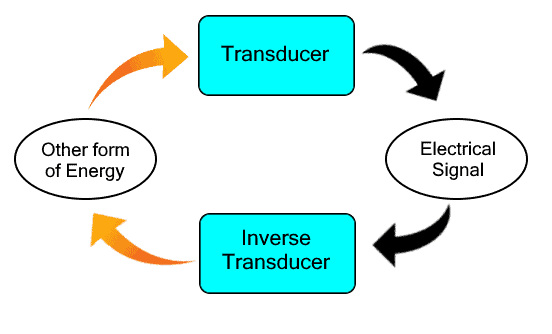 Types of Transducer based on the Principle of Operation

Transducers are divided into different types based on the principle of operation.

A photovoltaic cell is an active transducer that converts light energy into electrical energy. It is made of semiconductor material having a PN junction. When a light particle enters the junction, it energizes the junction and releases current into the connected load. The current is known as photoelectric current.

It is also known as solar cells used in solar panels. They are used for converting solar energy into electrical energy to power electrical equipment. They are the source of green energy.

A piezoelectric transducer works on the principle of the piezoelectric effect. It generates electrical energy that is proportional to the pressure, force, and strain on it.

There are various materials that produce the piezoelectric effect. One of the most used substances is quartz crystal made from silicon oxide SiO2. It produces a charge on its surface when a force is applied on it. The charge can be utilized by connecting electrodes to its surface.

A piezoelectric transducer is used for measuring the change in pressure, acceleration, etc. They are used in automatic doors for sensing footsteps. It is also used in a lighter to generate necessary sparks to ignite the fuel. Microphone also operates on piezoelectric effect to sense the sound energy pressure and convert it into an electrical signal.

Such transducer works on the principle of the Hall Effect. it can detect a magnetic field and convert it into an electrical signal that is proportional to the magnitude of the magnetic field.

Hall Effect transducers are used for proximity and position sensing, speed detection in the tachometer, etc.

An electromechanical transducer converts the mechanical motion into an electrical signal. It is used for sensing and measuring mechanical displacement and positioning.

Based on Quantity to be measured

There are different types of transducers used for measuring various physical quantities.

Pressure transducers are used for the following applications.

It is used for detecting an object in front of it. It is also used for measuring the distance between the object and the transducer. The speed of ultrasonic waves is equal to the speed of sound that is used in the calculation of distance.

A flow transducer converts the flow of a gas, liquid into an electrical signal. It is used for measuring the flow velocity of any gas or liquid.

An inductive transducer works on the principle of electromagnetic induction to detect a change in its self-inductance. It has a coil that develops a magnetic field due to its own current flow. When an object such as a metal comes in its magnetic field, its inductance varies that is detected by a deflecting needle.

A strain gauge transducer converts physical quantity like mechanical stress or strain into an electrical signal. It is made of an elastic material with trace of conductor that does not break when force is applied on it. It works on the principle of change in electrical conductivity or resistivity of the conductor.

When force is applied, it bends and the conductor lengthens and gets narrower. Therefore, the resistivity of the conductor changes. The change in resistivity is translated into the electrical signal using a formula that is proportional to the stress applied on it.

Strain gauge transducers are mainly used for measuring stress and strain in the field of civil engineering.

Acceleration transduces or accelerometer is a transducer that converts the acceleration of a body into an electrical signal. It can sense the change in velocity. Accelerometer uses various operating principles.

It is divided into two types;

The accuracy of a transducer is the maximum difference between its actual value and the indicated value. It is expressed in a percentage of the actual value. A transducer must have high accuracy to measure the physical quantity accurately.

A transducer must be able to withstand extreme environmental conditions and mechanical stress. A rugged and robust transducer’s performance Is not affected by its environment.

The ability of a transducer to generate an identical output signal multiple times when applied with the same input signal. The output signal must repeat itself and do not vary with time.

The capability of a transducer to provide a stable output and does not fluctuate.

The ability of a device to sense the smallest change in a physical quantity and translate it efficiently into an electrical signal is called sensitivity. A device having higher sensitivity can measure more accurately and precisely.

A transducer having a small size is crucial for installing compact devices without taking much space.

The error is the difference between the measured reading and the actual reading. The error can be caused by various factors.

The speed of a transducer plays a vital role in its performance as it shows how quickly it translate a physical quantity into a stable electrical signal.

Hysteresis is the ability of a device whose output not only depends on its current input but the previous input as well.

Here are some advantages of Transducer

Here are some disadvantages of a transducer

The conversion of any physical quantity into an electrical signal is used in almost every field. Here are some applications of transducers.

In general, we use multiple transducers in our daily life such as the lighter we use in our kitchen has a piezoelectric crystal that generates a spark when hit with a spring-loaded hammer. Almost every electrical equipment or gadget has a transducer embedded in it. different types of transducers are used in electronic measurement devices.

What are the Different Colors Electrical Outlets Used for?

What is a Thermistor? Types of Thermistors and Applications