We always do not have a 5V battery readily available, and sometimes we need higher voltage and a lower voltage at the same time to drive different parts of the same circuit. To solve this issue, we use a higher voltage, which is in our case a 12V battery as the main power source and step down this voltage to get a lower voltage, say 5V wherever required. For achieving this, a BUCK CONVERTER circuit is used in many electronic gadgets and applications that drop the voltage to match the load’s requirement.

What is a Buck Converter?

A buck converter (also known is step down converter) is a DC-to-DC converter, which steps down the voltage from the input to its output. Buck converter achieves its output using semiconductor-switching devices, which are generally diodes and transistors arranged in a particular order and each switched during certain times to finally give the required output. Buck converters can be highly efficient, sometimes often as high as 90%.

The basic Buck converter circuit consists of the switching transistor, together with the flywheel circuit. When the transistor is in ON state, the current is flowing through the load via the inductor. The inductor opposes changes in the current flow direction also storing energy in the process. The diode, which is connected parallel to the load, is now not operational as it is in the reverse bias.

The current flowing in the circuit also charges the capacitor. Now, when the transistor is turned OFF, the charged capacitor and the inductor apply a voltage across the load because of the back e.m.f. now that there is no voltage source in the circuit. The energy stored in the inductor is sufficient for at least a part of the time the switch is open. If the times for which the switch is kept ON and OFF changes, it, in turn, changes the output DC voltage between 0V and Vin.

The diagram below shows a simple Buck converter operation. 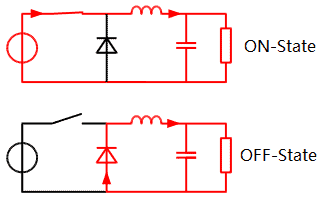 What is a Boost Converter?

The diagram below shows a simple Boost converter operation. 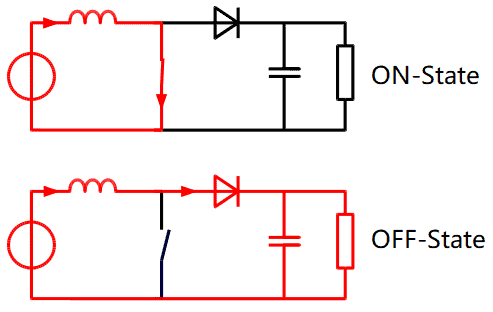 A simple diagram below shows the working principle of a Buck-Boost converter. 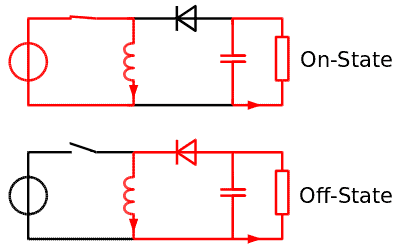 Now, there are many ways to achieve our required BUCK CONVERTER, but we use the most popular switching regulator available in this segment, using the IC MC34063. The other popular method is by using a circuit of MOSFETs switched according to a fixed pattern.

MC34063 is a monolithic control circuit having all the functions required for the construction of DC-to-DC converters. It consists of multiple functions, which are comparator, oscillator, high current output switch and active peak current limit.  MC34063 is available in DIP, SOIC and SON packages. There are eight pins in each. The table of which is given below.

Also, this IC is widely available and it is a lot more cost-efficient than the other ICs available in this segment. That is why we are going to use this IC for our circuit. 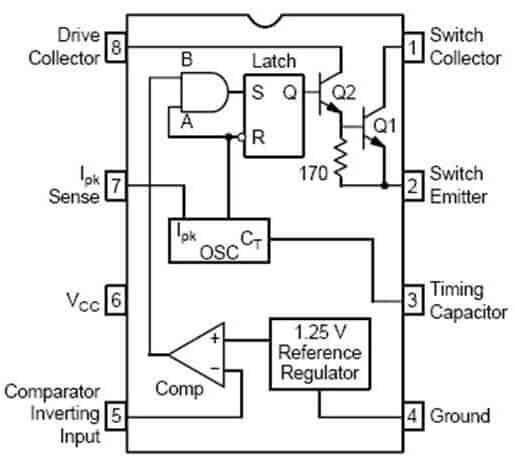 There are many applications associated with MC34063, a few of them are Human Machine Interface (HMI), Portable devise, Measurement and test, Gas and blood analyzer, computing, Telecommunications, Cable solutions, etc.

The 1N5819 is a metal to silicon power diode, also termed as Schottky Rectifier, which applies the Schottky Barrier Principle. It is mainly used as rectifiers in high-frequency low voltage inverters, polarity protection diodes, and freewheeling diodes.  It is also called a surface barrier diode, hot-electron diode or hot carrier diode. It is a little bit different from normal PN junction diodes where metal like platinum or aluminum is used in place of P-type semiconductor. In Schottky diode, semi-conductor and metal joined, forming a metal-semiconductor junction where the semiconductor side acts as a cathode and the metal side acts as an anode. When metal-semiconductor junction formed between metal and semiconductors, they result in a depletion layer also referred to as the Schottky barrier.

Schottky comes with low stored charge and exhibits lower power loss and higher efficiency mechanical characteristics. It is manufactured in such a way that all external surfaces are corrosion resistant and terminals are easily solderable where current flows in one direction only and it stops the current flowing in other direction. The power drop which happens in this diode is lower than PN junction diodes. When voltage is applied across the diode terminals, current starts to flow which results in the small voltage drop across the terminals. The lower voltage drops results in higher efficiency and higher switching speed.

The above schematic diagram shows the electrical symbol for a Schottky diode. 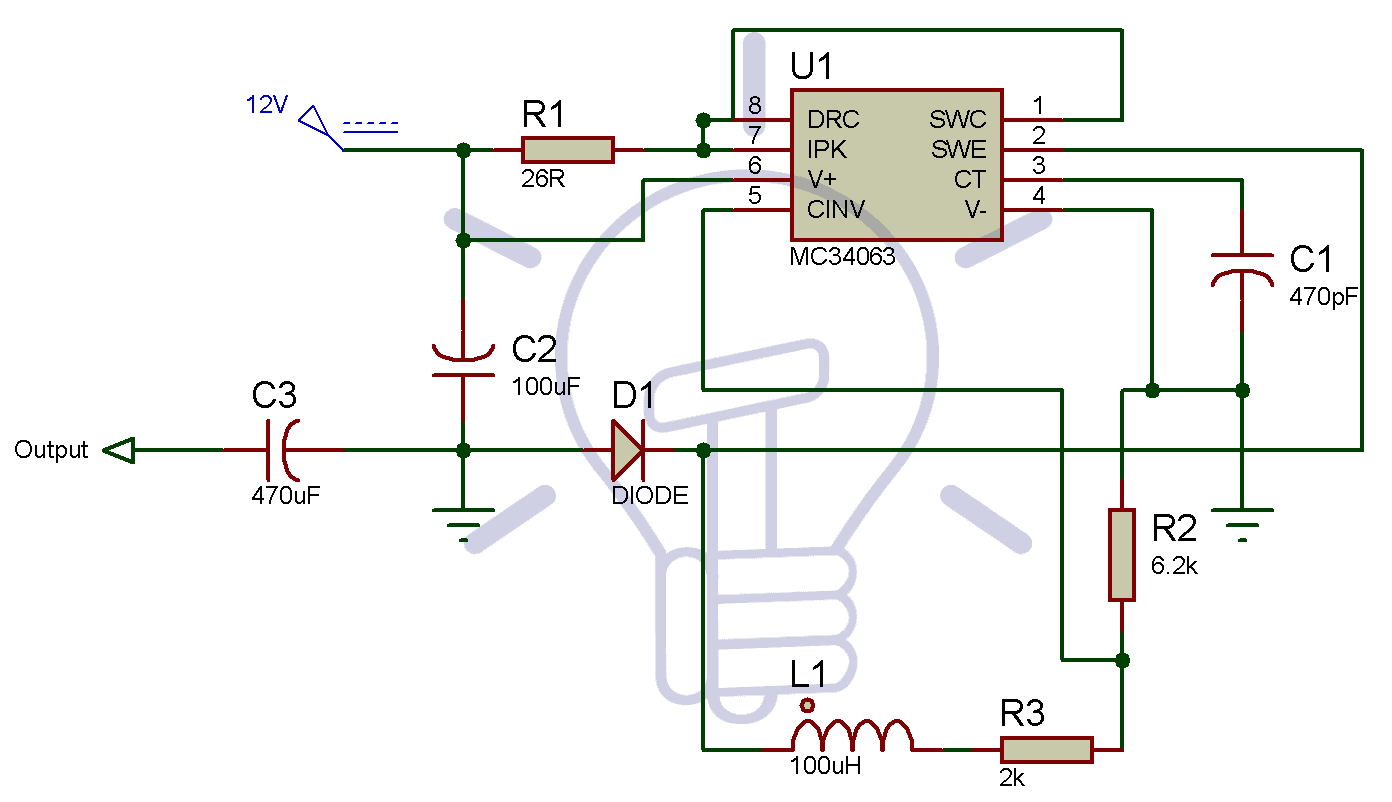 The above circuit diagram shows the circuit along with all the calculated values for our required operation.

Working of 12V to 5V Circuit

Connect the circuit as given in the circuit diagram properly. First to power this chip we connect +V to pin 6 and the pin 4 to ground. At the same time, we connect a capacitor CIN to filter excess noise from the power supply. Pin 3 is connected to CT which is determines the switching speed of the circuit. Pin 5 is the inverting terminal of the comparator. The voltage of the noninverting terminal is 1.25 V from the internal voltage regulator. To the inverting terminal, we place a resistor network composed of two resistors. These decide the gain of the op-amp comparator. In this way, we make a Buck converter which now steps down our input of 12V DC to 5V DC.

There are many applications in our daily lives, which takes only low-voltage inputs. They also need a regulated 5V for safety. For example, battery chargers, Wi-Fi modules, Arduino modules and so on. The above circuit fulfills the input needs of all of the above mentioned and many more applications.