There is a casino game and a French word accompanying it called “Roulette”. This circuit resembles the functioning of a Roulette wheel game, hence the name given to it. This circuit consists of a timer IC and a special IC called CD 4017, which is a decade counter.

Below is the circuit diagram for the LED roulette circuit. 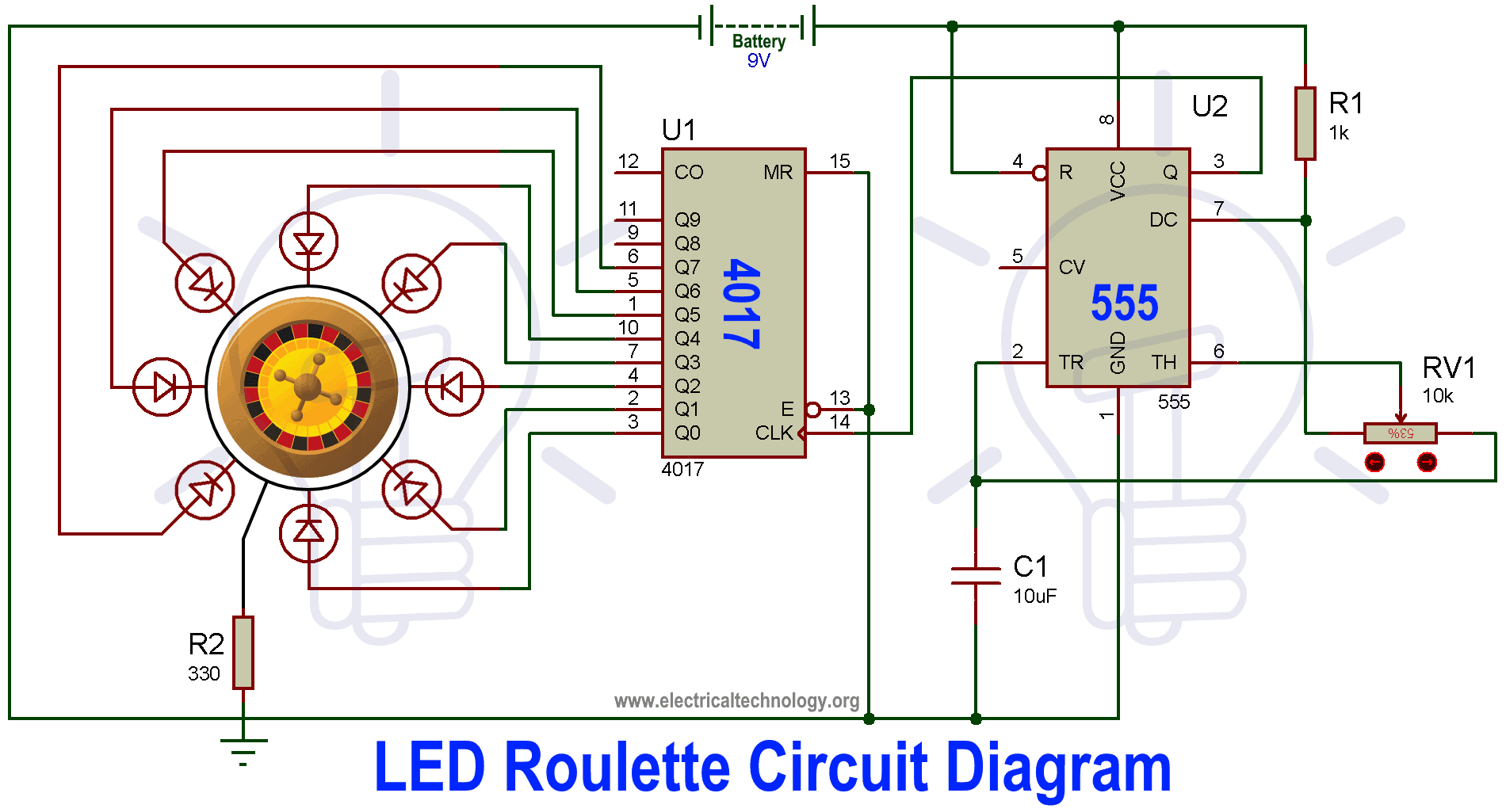 555 timer IC is mainly used for the pulse generation and as an oscillator. The pin diagram of the 555 Timer IC is given below.

There are three modes of operation of the Timer IC, which are bistable, Monostable and astable mode.

The circuit in consideration has a requirement for a timer since the LEDs in the circuit are meant to repeat the flashing in a period manner. The Decade counter IC CD4017 is the best fit for this application. This IC is a CMOS decade counter, which means that this IC primarily uses CMOS as its base to function. There are many ways as to which a counter can be made. But this IC uses CMOS technology. As its name suggests, this IC can count from 0 to 10. This IC is also called a Johnson 10 stage counter in honour of the inventor of this IC.

This IC is generally used for low range counting. Even though the IC does not have a high range, but it still has got some pretty unique features. Some of them are listed below.

The pinout for the CD4017 IC is given below. 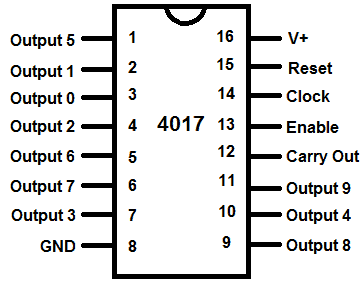 As we can see in the above picture, there are 16 pins in this IC. There are 10 output pins, which are from 1 to 7 and 9 to 11. Each of these 10 output pins are marked in an order. This is the order in which they turn high one after another. The input that comes from a timer IC will provide the timing at which the consecutive output should become high. They then continue to repeat the process after the ninth output is reached. There are six other pins excluding the output pins. These pins are used for controlling the IC directly. The six other pins for the IC will be described below.

Pin 14 in the IC is a clock pin. This clock is the frequency provider for the working of this IC. As we discussed above, this IC needs a clock according to whose clock cycles there is sequential high and low in the output pins. If there is no clock, it should not be left unconnected; it should be connected either to the supply voltage or to the ground, according to the input standard rules of CMOS. And one thing to note is that the clock will function on the clock highs, which means that the sequential output will change only when this pin encounters a high from the input clock.

There is also a reset pin which stops the ongoing sequence of outputs and starts them over from their initial state. This reset pin is present in pin 15 of the CD4017. When the reset pin is connected to the ground, the circuit resets itself.

To maintain the working of the sequential output properly, there is another pulse that is given to the IC, which completes a cycle in ten cycles of the input clock. So when the sequence of the outputs is completed and the pulse from pin 12 does not complete its cycle, then the next batch of outputs will be halted to match the frequency at which they are supposed to work. This pulse which is provided at the pin 12 is called carry out signal, hence the pin 12 is also called a carry out pin. The function it performs is called given a name. It is said if the carry over pulse ripples the IC, if it has to correct the working.

A potentiometer is a three terminal passive electronic device. Potentiometer change the voltage across any component by adjusting the sliding connector across a uniform resistance material.

It uses the basic voltage divider concept for working. The pin diagram of a typical potentiometer is given below. 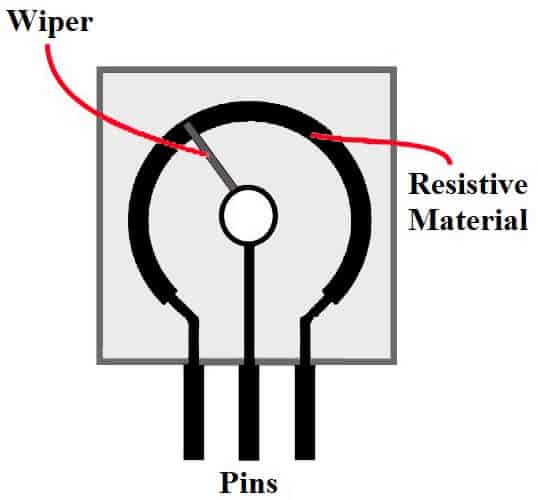 The potentiometer has two fixed terminals for input at the end of the internal resistor strip. There is a third terminal which is from connected to a slider which moves across the strip and changes the voltage between one of the input terminals and the slider terminal.

There is another device which works in the same way but is different fundamentally is a rheostat. A rheostat is also a variable resistance device but it works in a different way. It has only one fixed terminal and the connection to the circuit is from a moving slider.

Based on the style in which they work, potentiometers are divided into two types.

Potentiometers are used in some applications which are listed below

The values of the resistors and capacitors are already calculated and given in the circuit. We can connect the LEDs in any order we want to, but to honour the name of the roulette game, we will try to arrange them in a circular fashion.