What is Hopkinson’s Test? Its Circuit Diagram and Operation in Motor Generator Set & Coupling

What is Hopkinson’s Test?

The mechanical output of the first machine (motor) is fed to drive the second machine (generator). Hence, this test is known as a back-to-back test.

The electrical output of the second machine (generator) is used to supply the first machine (motor). Therefore, this test is known as the regenerative test.

Both machines are identical. It means ratings, armature resistance, filed winding resistance and losses are equal for both machines. If we consider an ideal machine (zero loss), the motor-generator pair continuously operate without any supply.

Good to Know: Hankinson’s Test is also known as Back to Back Test, Heat Run Test and Regenerative Test.

In the Hopkinson’s test, the motor-generator set is connected as shown in the figure below. 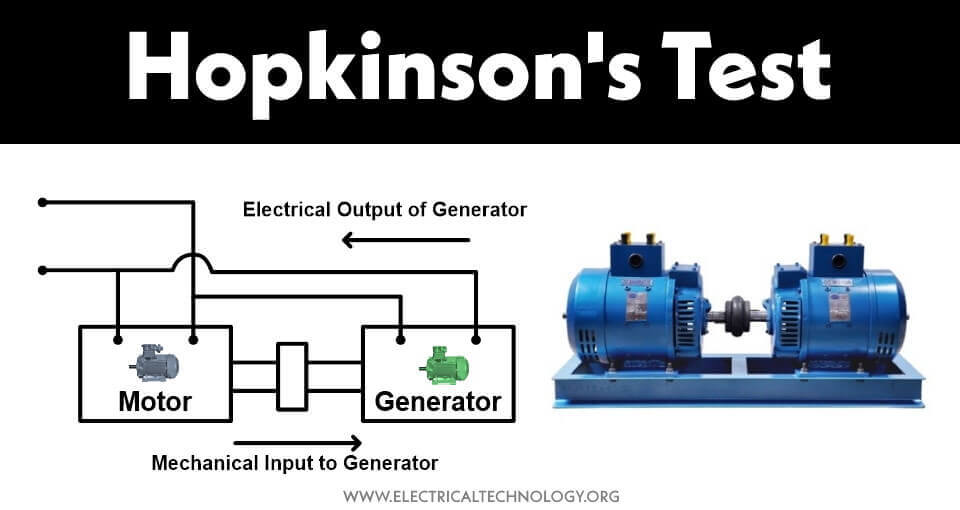 For example, the power required to run this set is 100 W, and the losses of each machine are 15 W.

70 W output from the generator is supplied to the electrical input. Hence, 30 W is supplied by the input. And this 30 W is losses for both machines. In an actual case, we don’t know the loss of the machine. And we conduct this test to find the losses.

The connection diagram for the Hopkinson test is as shown in the figure below. Here, two identical DC machines are connected electrically as well as mechanically. 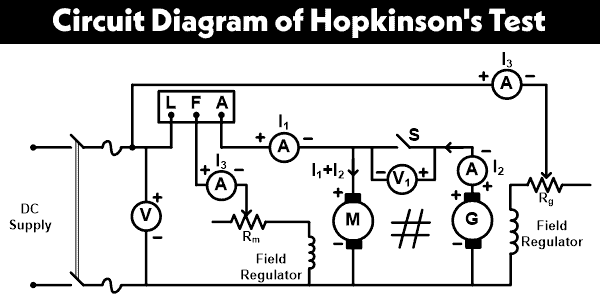 The electrical supply is given to the first machine and this machine behaves as a motor. Initially, switch S is kept open. Hence, the input is supplied to the motor only. The speed of the motor is adjusted to the rated speed with help of a field regulator.

The second machine behaves like a generator. When we give input to the motor, it will start rotating. And both machines are connected on the same shaft. So, the generator generates electrical power. The output of a generator is adjusted to rated power with the help of a field regulator.

Still, the switch S is open. A voltmeter is connected across the switch. When the voltage generated by the generator is the same as the supply voltage, this voltmeter indicates zero reading. And at this stage, close the switch S.

Now the generator will supply to the motor. And the electrical power supplied by the input is used to meet losses of both machines.

Power drawn from the supply = VI1

The power drawn from the supply is equal to the losses of both machines. The losses of DC machines are; copper loss, iron loss, and mechanical loss.

Let’s assume the iron and mechanical loss for each machine is Wc.

Now, a sum of all losses is equal to the power drawn from the supply.

There are three types of losses in the motor;

The current that passes through the shunt field winding is I3.

Hence, the efficiency of a motor;

The current that passes through the field winding of the generator is I4.

The output of generator;

Hence, the efficiency of a generator;

The advantages of the Hopkinson test are as listed below.

The disadvantages of the Hopkinson test are as listed below.

Applications of the Hopkinson Test.

As mentioned above, the main purpose of the Hopkinson test is to determine the efficiency of electrical machines especially in case of coupling of motors and generators (also known as Motor-Generator Set) based on the combined iron losses of both machines which can’t be separated.

What is a Thermistor? Types of Thermistors and Applications