As we have seen in the equivalent circuit of transformer, there are four main parameters;

These tests give more accurate results compared to the test performed on a fully loaded transformer (direct method). Also, these tests are more economical as the power consumption is very less. Two tests considered an indirect method of testing;

The open-circuit test (aka No-load test) is performed to determine the losses in a transformer such as core loss (iron loss), no-load current (I0), and no-load equivalent circuit parameters (R0 and X0). This test is performed either on primary winding or secondary winding. But in most cases, this test is performed on low-voltage winding. Because it is difficult to obtain high voltage in laboratories and the current that passes through the high voltage winding is very small. So, it may be difficult to measure the accurate readings.

Therefore, the open circuit test is performed on low voltage winding. The experimental connection diagram of the open-circuit test on a single-phase transformer is shown in the figure below. 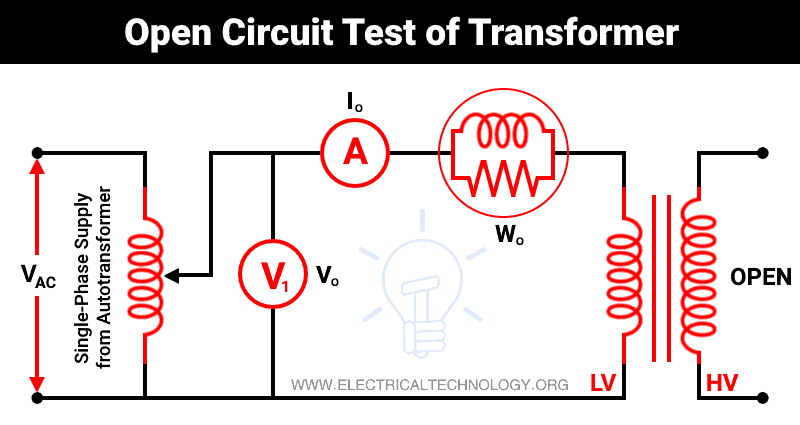 As shown in the above figure, the primary winding (low voltage winding) is supplied by rated voltage and frequency (commonly, a single phase supply from autotransformer). And the secondary winding is kept open. Now, a voltmeter V0, an ammeter I0, and a wattmeter W0 are connected in the primary winding.

A wattmeter is connected to the primary winding that measures the supplied power. So, the wattmeter indicates the power loss occurred in the transformer core. In an open-circuit test, the reading of instruments is as below;

The observation table of an open circuit test is shown below.

Now, we can find the circuit parameter (R0 and X0) using the no-load current.

Now, from the working component and magnetizing component, we can find the no-load resistance and reactance as follows;

The schematic diagram of the short circuit test is shown in the figure below. 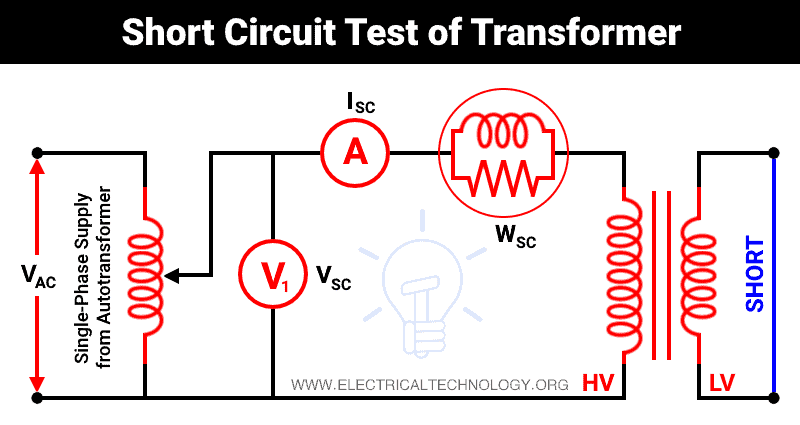 So, the ammeter connected in the high voltage side measures the full-load primary current. The voltmeter measures the supplied voltage when full-load current flows through the primary winding. In this condition, the supplied voltage is hardly 5 to 10 percent of full load voltage. Due to low input voltage, the flux produced in the core is very low. And core loss is proportional to the square of flux. Hence, the core loss is very small that can be neglected.

The approximate equivalent circuit of the transformer under the short circuit test is shown in the figure below. 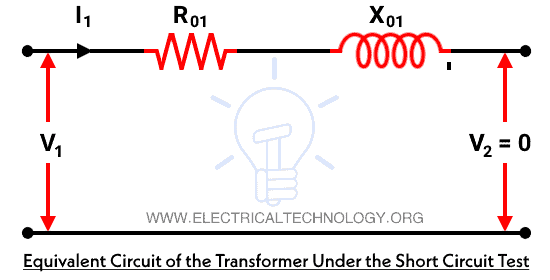 The reading of instruments in short-circuit test are as follows;

The equivalent resistance of transformer referred to primary;

Sumpner's Test or Back-to-Back Test on a Transformer