Which One is the Fatal, Voltage or Current and Why?

A bad wife or girlfriend won’t kill you but voltage and current at some rate will do it easily. That’s why no one should play with electricity (power, voltage and current) as it is our friend but the worst enemy as well. If we give it a chance, it will never miss at any cost.

To know the exact reason, we must know the difference between Current and Voltage. As explained in the previous post, voltage is the cause and current is the effect. 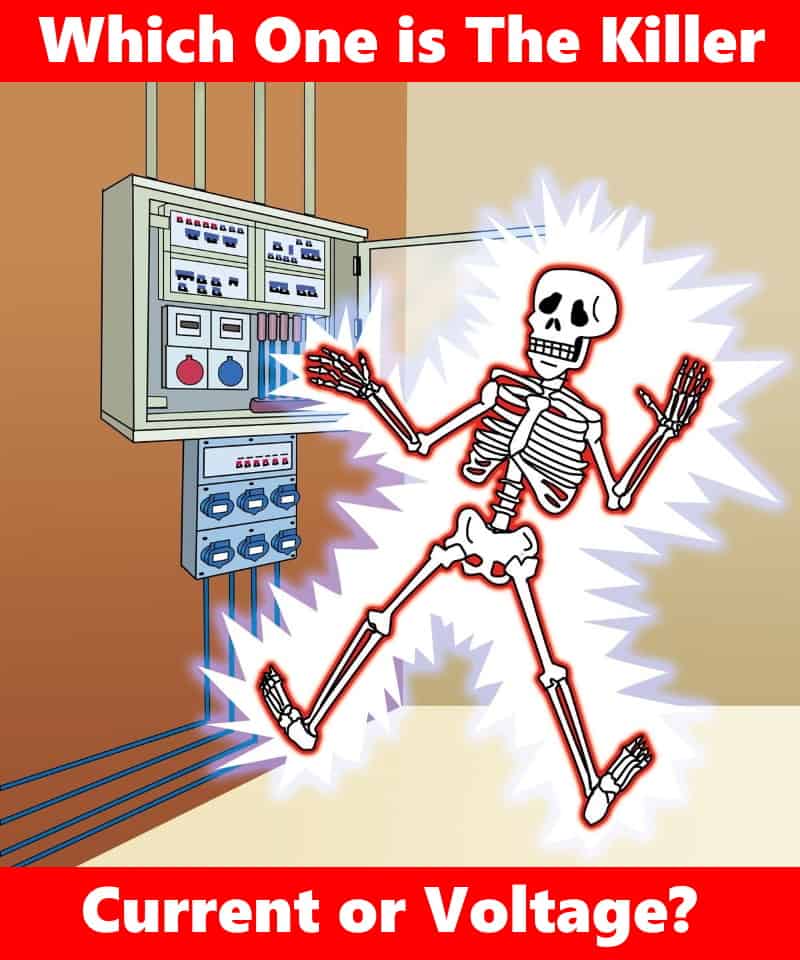 Related Post: AC or DC – Which One is More Dangerous And Why ?

To know which is the fatal, voltage or current? Let’s see the following formulas.

The logic behind this scenario is that some of the quantities remain same in fist case and paraders are change at the second case. Assume that the resistance is constant, then:

Related Post: What Happens When an AC Line Touches a DC Line?

So the main cause is the voltage and current as an effect is the killer at specific rate for specified period. Current will kill you but some amount of voltage is required to flow that current in the body breaking the human body resistance. In other words, an enough power is required to pass in the human body for proper electric shock.

In short, high voltage with a few micro amperes cause nothing to the human body like in high voltage supplying cathode ray tube in traditional TV set or high static voltage in the comb. on the other hand high current with hundredth of ampere with ten, twenty or thirty or more make nothing to human bodies like electric welding machine as the amount of voltage is not enough to push that level of high current in the human body as there is a path with least amount of resistance as compared to the human body internal resistance. Another example is the car battery having high amperage with low voltage level (12V DC) but if we tough both leads, it won’t electrocute. Therefore enough voltage of hundredth with enough current make electric shock to human bodies because human body like resistor need enough power to pass current.

Keep in mind that the effects of electrical current through the human body vary according to:

The following level of voltage are considered safe.

The following tables shows the different values of AC and DC currents in mA and its effect on the human body. Keep in mind that it is the average value and not meant to be same for everyone as it depends on different factors.

Conclusion about the confusion of which one is hazardous, Current or Voltage?: Current Kills, Not the Voltage. But Voltage is must to drive the Current. I.e. Amperes are responsible for electrocution, Not the Volts.

Warning: Both AC and DC voltages and currents are dangerous. Don’t touch the live wires. In case of electric shock and hazardous effects, try to disconnect the power supply and push back the victim body from the source (keep in mind that you should properly insulated before doing so). Only call the professional and licensed electrician in case of repairing or troubleshooting. In case of emergency, call the local authority for medical help ASAP.

Why Circuit Breaker Capacity Was Rated in MVA and Now in kA and kV?