A Volt is the derived unit of voltage, electric potential or potential difference and electromotive force (EMF). It is named after the Italian physicist Alessandro Volta (who invented electric battery) and used in physics and electrical and electronics engineering as a derived unit in SI (International System) to measure the voltage and EMF.

The unit of Volt denoted by the symbol of “V” is used to measure the potential or potential difference between two points. A volt is defined as:

If a one joule (J) of energy is utilized to move a one coulomb of charge (C) from one point to another, the value of potential difference between these two points is one volt (V).

Similarly, it forms the equation in term of energy consumption as follow:

Relates Post: What is Ampere (A)? Unit in Electrical Engineering and Physics

A volt can be expressed as a pressure which makes possible the flow of electrons in a conducting path such as a conductor or closed electric circuit. 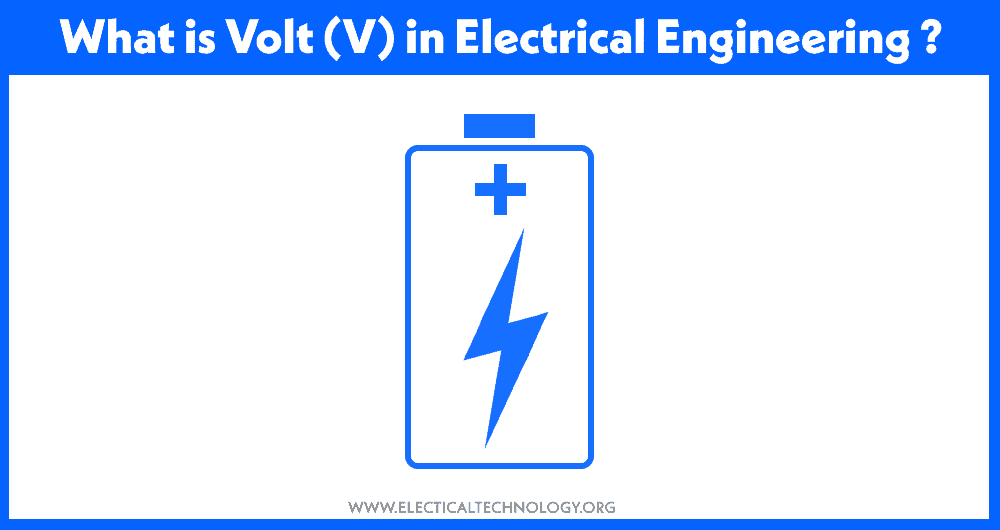 In other words, a volt is expressed as the potential difference between two points which allow the flow of one ampere of current and dissipates one Watt of power during the process between these two points.

According to Ohm’s law, If one ampere of current flows in a resistor having the value of one ohm resistance, the value of potential difference across the resistor will be one volt.

The potential difference, or electric pressure (commonly as voltage) is needed to make possible the flow of charge in a conducting material. This electric potential can be obtained from a voltage source like generators and batteries etc.

Volts Equations used for Conversions to the Related Quantities

Volts from Watts and Amps

Volts from Joules and Coulombs

Volts from Amps and Resistance

How to Measure Volts?

To measure the voltage in volts across an electrical element such as resistor, capacitor, inductor, diode etc., simply put the two leads of the multimeter (in parallel) and the display will show the exact value of voltage in volts. You may follow the step by step guide posted in the previous article as “How to Measure Voltage using Digital and Analog Multimeter?“.

How to Calculate Volts?

Based on the above given formula and equations for voltage in volts (for different scenarios), we may calculate the value of potential difference in volts as follows.

Find the voltage drop in Volts if the value of flowing current is 2A in a 12Ω resistor.

Calculate the value of supply Voltage in Volts if 0.5A current is flowing in a 30W light bulb.

Determine the value of required voltage in volts to glow an LED bulb having 45W and 5Ω resistance.

What is the value of voltage in volts if 50 joules of energy is utilized to move 10 coulombs of charge from one point to another.

How to Size a Generator? Portable, Backup & Standby for Home & Commercial Applications

What is Ampere (A)? Unit in Electrical Engineering & Physics