What is a Wind Power Plant?

The wind power plant is widely used in the entire world. Because the wind is the best natural source that available in most places. The wind turbine can be operating between a wind speed of 14 km/hr to 90 km/hr.

One single wind turbine is not sufficient to produce electrical energy in bulk amounts. Therefore, more than one wind turbine is placed at the location at which the wind is continually available. And that place is known as a wind farm. Generally, wind farms are located near the sea area. 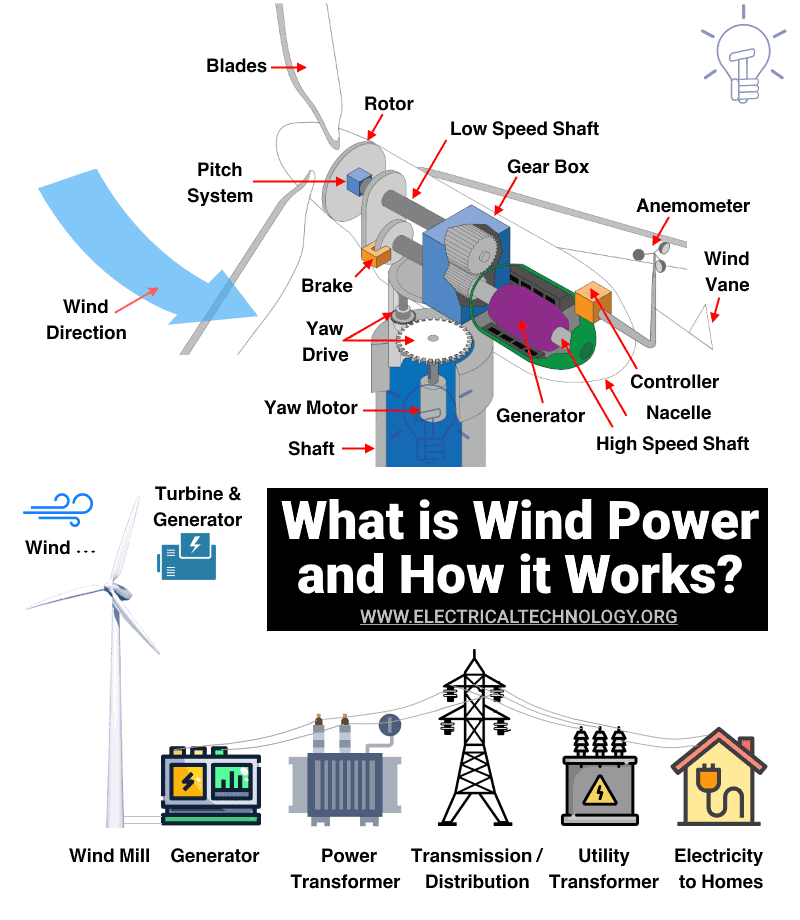 According to the orientation of the axis of the rotor, wind turbines are classified into two types;

Two-blade turbines are the most cost-effective turbine. But in this condition, a yaw control system is required to mitigate vibration. This configuration is used for large units (2 MW to 3 MW) with suitable material and control systems.

Multiblade turbines are used 12 to 20 blades made up of glass fiber reinforced plastic. The diameter of the multi-blade rotor varies from 2 m to 5 m. The multiblade turbine consists of curved sheet metal blades with inner and outer ends fixed with rims. The diagram of a multiblade turbine is as shown in the figure below.

In this type of wind turbine, the main rotor shaft is placed to transverse the wind and other accessories are placed at the base of the turbine.

To estimate the performance of wind turbines, we need to consider the below parameters;

The power co-efficient defines as a ratio of power delivered by the rotor to the maximum power available in the wind turbine.

The maximum power available at the turbine (Pmax) is;

The actual efficiency of a wind turbine may be less due to friction losses into the rotor, gearing, and mechanical coupling losses in a generator. In an actual wind turbine, the efficiency is in the range of 35% to 44%.

The tip speed ratio defines as the ratio of blade tip speed to the free stream wind speed.

Blade tip speed is defined as;

This equation applies to the horizontal wind turbines. And in the case of the vertical wind turbine, the blade tip speed represents the peripheral speed at the middle of the blade length.

Solidity is defined as the ratio of blade area to swept frontal area of the turbine. 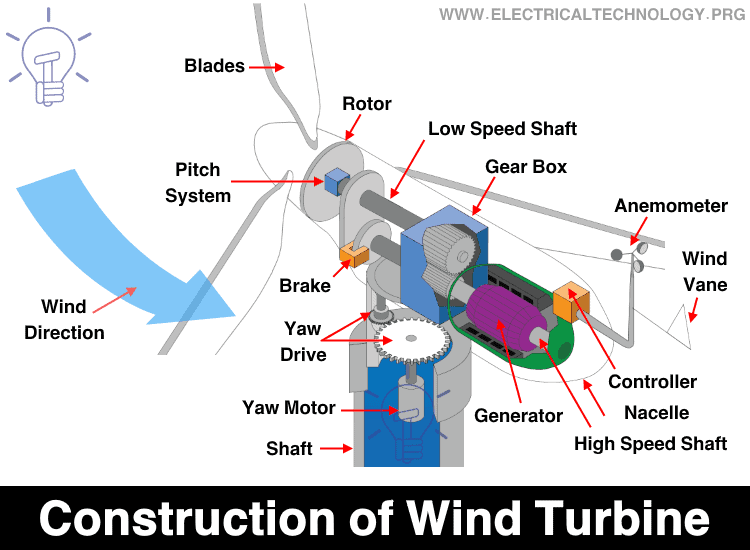 The power produced by the wind turbine depends on the available wind speed. Therefore, the wind turbines are located at a place where persistent and strong wind is available. The wind varies daily. So, we need to analyze the data for a month or year.

To select the location for a wind turbine, the below-listed matters need to be considered;

At high altitude, the wind density is high which increase the output of wind turbine. In a place where the altitude is not available, the tower size is increased to get a high altitude. The height of the wind turbine is calculated from the sea level.

To achieve high-density wind, the wind turbine is constructed at height. It requires a big and strong foundation to the ground. So, the nature of the ground is free from erosion and the place is free from land sliding problems. 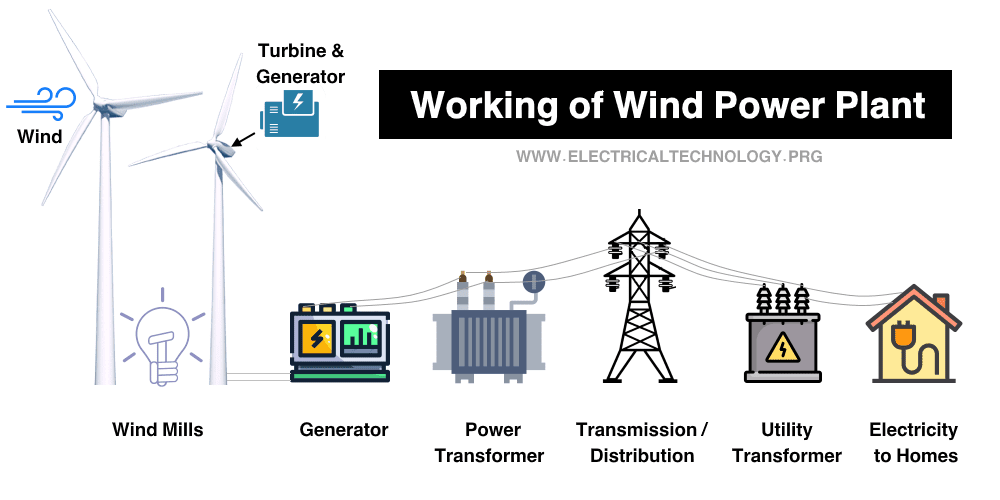 According to the speed and frequency, there are different schemes available for the electric generation by the wind turbine. These schemes are listed below.

But while operating the induction generator, a capacitor or capacitor bank is required to avoid reactive power support in the transmission grid.

In this scheme, dual speed wind turbine is connected with a double winding transformer as shown in the figure below.

This type of scheme is also used in autonomous applications like a street light. It produces high power for both low and high wind speeds. This scheme is suitable for both vertical and horizontal axis turbines.

In this scheme, the slip ring induction generator is used. This scheme is used to increase the power generating capacity of a wind turbine. The power is generated from both stator and rotor both. The output power generated at slip frequency is converted into power at line frequency using rectifier and inverter pair.

The output power from the rotor depends on the slip and speed. The operating speed range is between Ns to 2Ns and the slip lies between 0 to 1. The connection diagram of this scheme is shown in the figure below.

The output of a generator is converted into DC power using a rectifier. To control and monitor the entire system, a feedback controller is used in the feedback loop. This type of scheme is useful in the application where the load is insensitive to a frequency like a heating load. The connection diagram of this scheme is shown in the figure below.

The stator of the induction generator is connected with the grid using back-to-back connected power electronics converters. The power converts are used to convert AC to DC and again DC to AC. The size of the converter depends on the power rating of a wind turbine.

The squirrel cage induction generator does not require brushes. Hence, the system requires less maintenance and the operation of the generator is easy and economical. A soft starter is required in the system to smooth operation with the grid. And the cost of the entire system is very high.

In this type of generator, the DC transmission link is used with the wind turbine. The figure of this scheme is as shown in the figure below.

The main power transmits from stator winding. A small amount (20-30%) of power is transferred through the rotor. Hence, the cost of the converter is reduced. This scheme is used for high-power applications. This generator uses a slip ring induction generator that requires periodic maintenance.

In this system, a DC transmission link is used to transfer the power from the wind turbine to the load center. To convert the power into AC to DC and DC to AC, back-to-back power converters are connected with the grid.

In this type of scheme, a permanent magnet synchronous generator is used with the wind turbine. The DC link is used to connect the wind turbine with the load center. Hence, this scheme required converter sets. In the below figure, the PWM rectifier is placed between the generator and DC link. And PWM inverter is connected to the grid.

In this method, the permeant magnet is used. And this will increase the cost of the system. Demagnetization occurs in the permanent magnet and the power factor cannot be controlled in this system.

Instead of a PWM converter set, uncontrolled converters are also used in the system. This scheme is shown in the figure below.

In this scheme, the voltage and current are proportional to electromagnetic torque and rotor speed. Here, a boost converter and Voltage source inverter (VSI) is used. Boost converter controls the electromagnetic torque by controlling the DC voltage (by changing the switching ratio). The VSI is used to control the DC link voltage and input power factor.

The disadvantage of the diode rectifier is that amplitude and distortion increase in the current waveform. And it requires a bulky capacitor bank and the life of the capacitor bank is short.

To improve the performance of the wind turbine, back-to-back converts are used with the permanent magnet synchronous generator. The connection diagram of this system is shown in the figure below.

In this method, the reactive and real power can be controlled with the help of the PWM modulation technique. The use of this technique is costly and requires a sophisticated control system.

The advantages of a wind turbine are listed below.

The disadvantages of a wind turbine are listed below.

What is IGBT? Construction, Types, Working and Applications 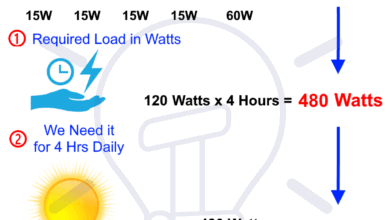