What is the Difference Between Clipper and Clamper Circuit?

Clipper and clamper circuits are electronic circuits used for the modification of AC signals. The clipper circuit can clip a portion of the AC waveform while the clamper shifts the DC level of the AC signal. They are quite different yet have almost similar circuit designs. 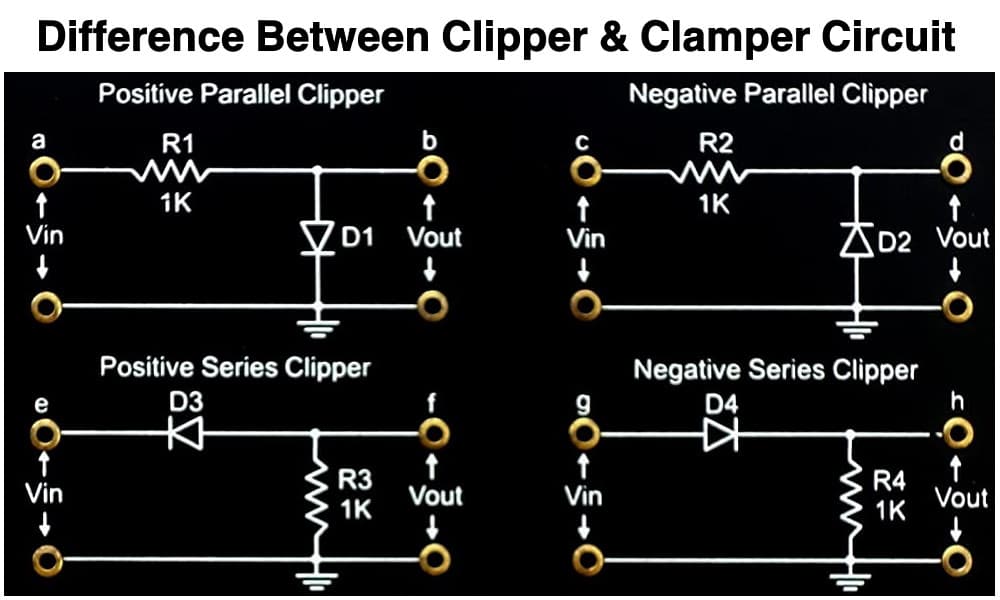 Before going into the list of differences between the clipper & clamper circuit, we are going to discuss it first.

A clipper circuit clips off or removes a portion from an AC signal without distorting or changing the remaining part of the waveform. It limits the voltage from rising above or below a certain point. Therefore, it is also used for protection against overvoltage. The clipper circuit can be also known as a clipper, clipping circuit, voltage limiter or slicer, etc.

A clipper circuit is made of a diode, resistor. The diode is used for chopping or clipping a portion of the signal’s waveform.

A clipper circuit does not change the amplitude of the waveform. It only blocks the amplitude from rising above a certain limit which is why it is also known as a voltage limiter.

A clamper circuit is used for shifting the DC level of the AC signal. It either shifts the waveform up or down without changing the shape of the waveform. It increases the amplitude of the signal which is why it is also known as a voltage multiplier circuit.

A clamper circuit is made of a diode, resistor & capacitor where the capacitor is used for storing the necessary charge to amplify the voltage or amplitude of the signal. It does not affect the shape of the waveform.

A clamper circuit increases the amplitude of the signal without affecting its shape or frequency. It is used to multiply the voltage of a signal.

Here is a positive clamper circuit