MOSFET is an acronym for Metal Oxide Semiconductor Field Effect Transistor. It is a type of FET (Field Effect Transistor) that has an insulated metal oxide layer between its gate and channel. On the contrary, JFETs gate is connected with its channel. The plus point of the insulated gate is its superior speed and performance with very little leakage current.

Now MOSFET is classified into two types depletion type MOSFET “D-MOSFET” and Enhancement type MOSFET “E-MOSFET. Both of these MOSFET’s are widely used in electronics, integrated and embedded circuits. 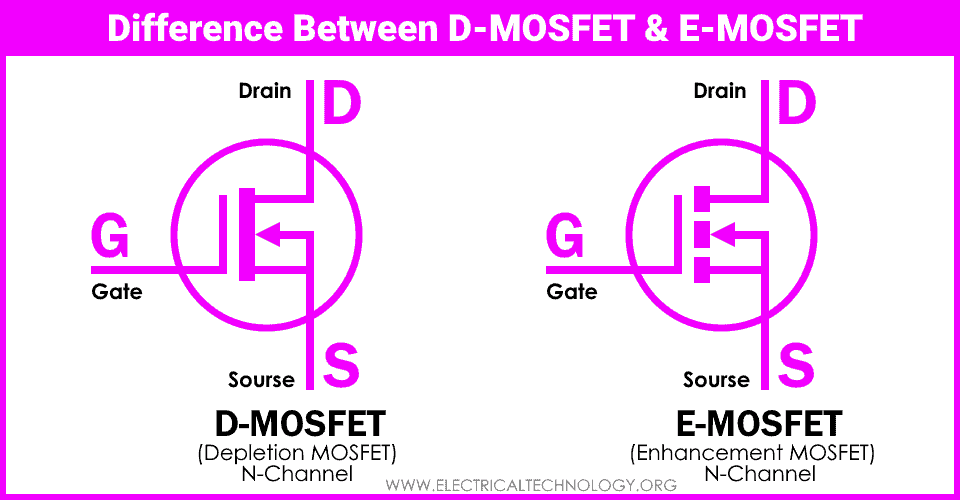 Before going into the differences between D-MOSFET & E-MOSFET, we are going to little bit discuss their basics first.

Depletion MOSFET or D-MOSFET is a type of MOSFET where the channel is constructed during the process of manufacturing. Therefore, the D-MOSFET can conduct between its drain and gate when the VGS = 0 volts. Therefore, D-MOSFET is also known as normally ON transistor.

If Gate and source is connected in forward bias and the VGS is increased, more majority carriers will get induced in the channel and its width will increase. It will result in increasing the current flow between drain and source.

In N-channel D-MOSFET, the source, drain and channel are made during the manufacturing from N-type material upon a P-substrate. The channel contains electrons as charge carriers. There is a metal oxide insulating layer between the gate electrode and the channel or P-substrate. 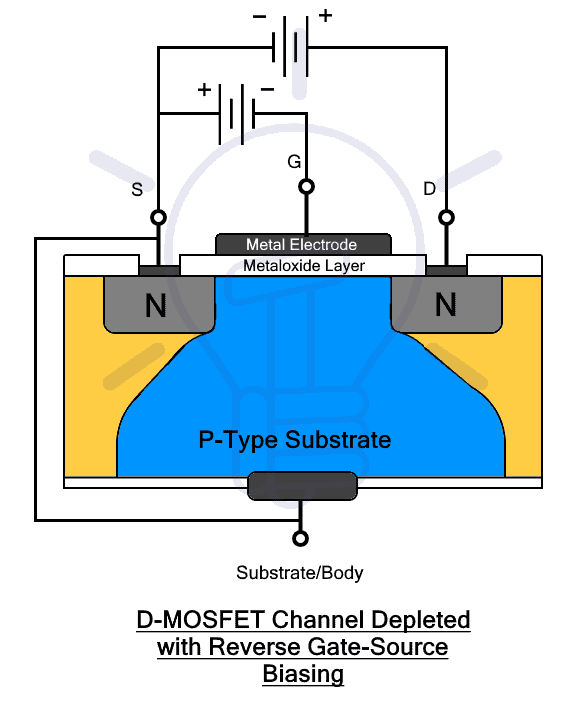 When the gate is connected in reverse bias i.e. negative voltage is applied, the holes from the P-substrate will attract towards the gate depleting it of the electrons and reduce the channel size. At a certain –Vth, the MOSFET will stop conduction. Therefore, N-channel D-MOSFET has a negative threshold voltage

In P-channel D-MOSFET, The source, drain, and channel is made up of P-type material upon an N-type substrate. P-channel has holes as the charge carrier. Therefore, to reduce the channel width or to attract electrons from the N-substrate, P-channel MOSFET is applied with positive gate voltage VGS. This positive voltage attracts the electrons from the substrate to deplete the channel of holes, thus eliminating the channel as well as the current flow. Therefore, the P-channel D-MOSFET has a positive threshold voltage.

If the gate and source is connected in forward bias, the potential difference will induce more charge carriers inside the channel thus enhancing (increasing the width) of the channel.

Enhancement MOSFET or E-MOSFET is a type of MOSFET where there is no channel constructed during its fabrication but it is induced in the substrate using the gate voltage. The E-MOSFET does not conduct when there is no gate voltage i.e. VGS= 0v. Therefore, E-MOSFET is also known as normally OFF transistor.

In case, the VGS or gate voltage is zero, there is no channel. Therefore, there is no path for the conduction of current between its source and drain.

By applying a voltage to the gate, charge carriers are induced in the substrate that produces a channel for the conduction of current between the source and drain. 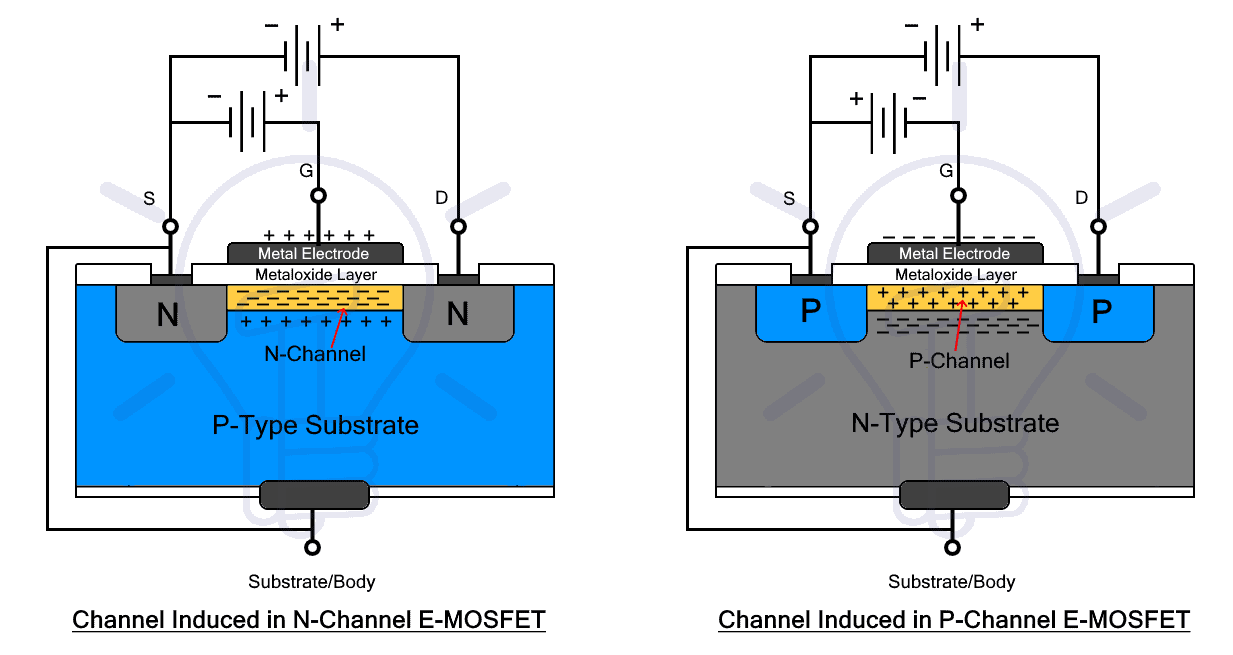 E-MOSFET is also classified into N-channel and P-channel E-MOSFET. The biasing and electrical characteristics of both channels are quite different.

N-channel and P-channel MOSFET has the same operation as the Depletion type MOSFET except there is no channel, to begin with; instead, the gate voltage is used to inject the charge carriers in the substrate to induce a channel between the source and drain. The gate is connected in forward bias to induce the charge carriers in the channel. Once the channel is induced, the current starts to flow between the source and drain.

The following comparison table shows the main differences between D-MOSFET and E-MOSFET.

That’s it. Now you know the basic difference between the D-MOSFET and E-MOSFET and all its related components and types. Let us know in the comment box if you have any other differences between them.

Difference Between BJT and FET Transistors

Difference Between JFET and MOSFET