What will happen to the 3-Φ Induction Motor Incase of Failure of 2 of the 3-Phases?

When a linear or balanced load is connected to the 3-Φ supply system, the sum of the instantaneous currents of all the three lines (phases) is 0. Alternatively, the magnitude of flowing current in one line (phase) is equal to the sum of the currents in other (remaining) two lines or phases but in opposite directions. To the point, in a three phase system, the return path for the current in any phase line is the other two phase lines. In very short, each of the three phases serve as a “return path” for the other of the remaining two phases. 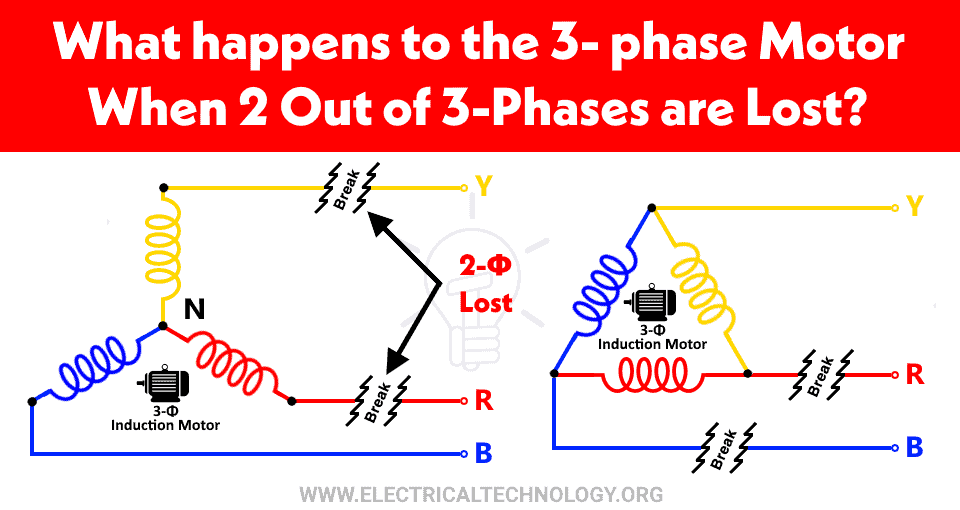 It is a different (as well as dangerous) scenario when one of the phases is disconnected to the running three phase induction motor and we have already discussed that case in our previous post in very detail. For motion, it is needed at least two phases for any current to flow in the wye or star (Y) connection or delta connection. In today’s post, we will discuss what will happen if two out of three phases are lost to the three phase induction motor. 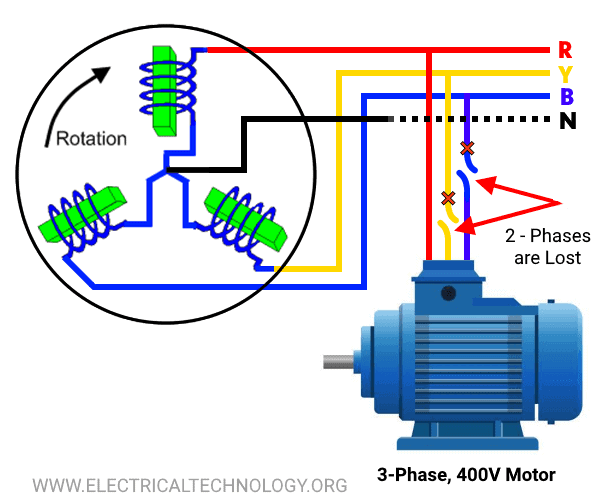 What will happen if Two of the Three Lines of Three-Phase Induction Motor are Opened?

As discussed above, all the three phases are needed to complete the circuit in a three phase induction motor where it is needed to produce a rotating magnetic field and uniform torque. When two of the phases are lost or broken due to some faults or blow fuses, the circuit acts like an open circuit.

In this situation, there is no return path for the current to flow in the stator winding. So no current flows at all. As only one phase is connected to the motor, the circuit is not like a single phase supply system (or operate as single phase induction motor) as there is a neutral wire for the returning current to complete the circuit.

So this is the same case like a Neutral or Phase is broken in a single phase supply system. When only one phase is connected to the 3-phase induction motor, nothing happen i.e. no damage or burning the motor expect:

In short, the circuit is incomplete in case of two phase failure out of three, so there will be no current, no phase shift, no flux, no RMF & torque and finally NO MOTION at all.

When two phases are lost the motor is as dead as if there is no electric power at all. So that,

The above discussion is a long winded way to say the three phase motor would stop (if it is running) or won’t start if stopped in case of two phase failure out of three phases. In that case, no harm to the motor like losing one phase out of three phases connected to the induction motor.

What happens to the 3-Phase Motor When 1 Out of 3 Phases is Lost?

What happens if You Connect a 3-Φ Induction Motor to 1-Phase Supply?