A distribution board is the combination of protective devices such as Main switch, MCB, MCCB, RCD, RCBO, Isolator, Fuses and Switches etc. used to control and safely distribute the power supply to the electric appliances and devices.

A distribution board is also known as main breaker box, electric panel or panel board used in commercial (as industrial) and domestic (as residential) applications to fulfill the need of safe electrical installations and distribution.

In UK, EU and other countries following the IEC rules, the voltage between three phases (L1, L2, and L3) are 400V, Three Phase (4 or 5 Wires) while the voltage between any Phase and Neutral is 230V AC (2 and mostly three Wires including the protective earth “E”). This way, a three phase distribution can also provide single phase supply from any phase and neutral.

How to Wire a Three-Phase Distribution Board?

As shown in the fig, the three phase, 400V (Three Lines + Neutral) service cable (from the secondary of Star or Y connected transformer (fed up by the secondary of delta connected power transformer) mounted on the utility (pole having 11kV voltage) and 3-phase kWh energy meter) enters to the main distribution board.

All the 12 No. of three poles MCB’s are connected to each live busbar i.e. Phase 1 or Line 1 as brown, Phase 2 or Line 3 as Black, Phase 3 or Line 3 as Gray. Keep in mind that Earth/Ground is must while Neutral is optional and depends on the system design especially in three phase load distribution.

For example, a three phase motor can be directly connected to all the three phases via 4-wires while an industrial power socket/plug having five terminals can be connected via 5 wires (including All three phases + neutral + earth wire). 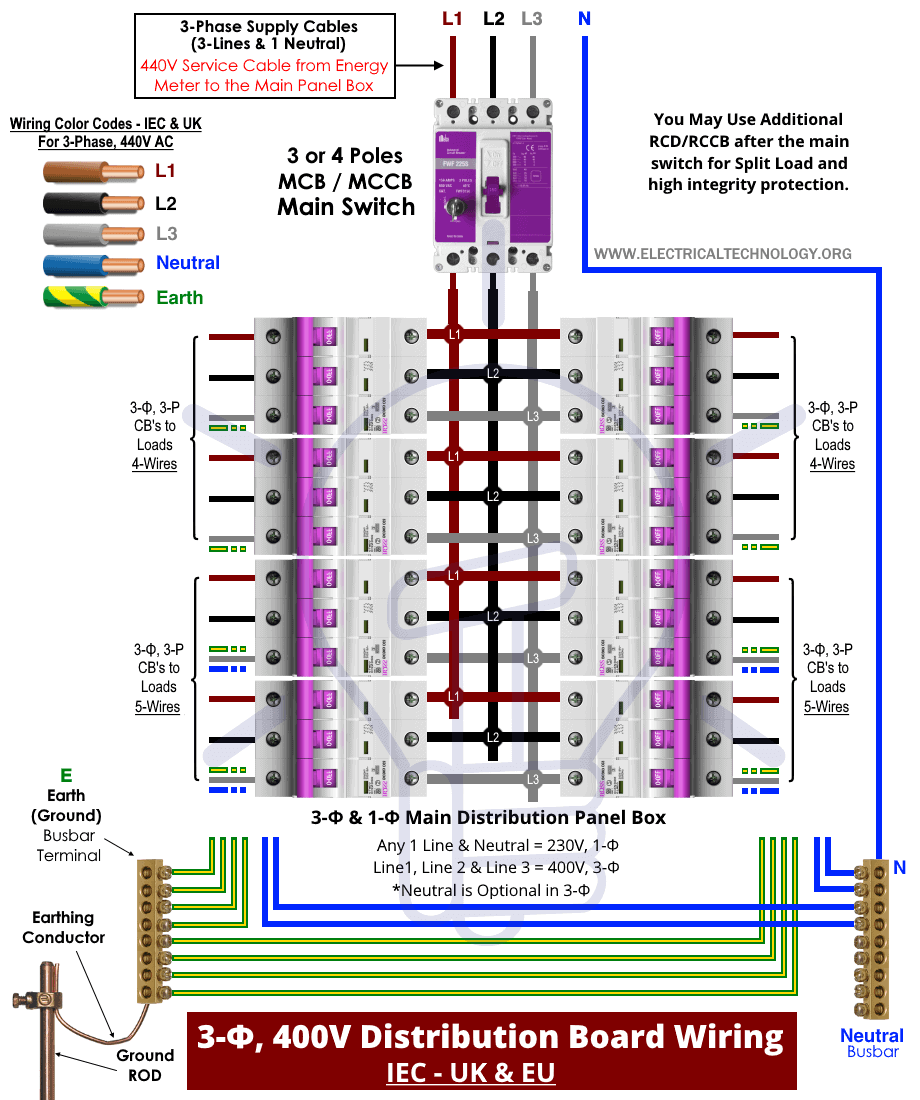 In a three phase distribution board, all the three phase, 400V load points can be connected directly to the three phases (L1, L2 & L3) with proper Earthing/Grounding wire. Keep in mind that Neutral is not always needed in a three phase system as it depends on the system design and operation.

We have used the following IEC wiring color codes for 400V three phase supply voltage applicable in the UK & EU.

For single phase 230V, Brown for Phase and Blue for Neutral are used.

For single phase 230V, Red for Phase and Black for Neutral are used.

How to Wire 1-Phase & 3-Phase Split Load Distribution Board?