What will happen to the 3-Φ Induction Motor Incase of Failure of 1 of the 3-Phases? 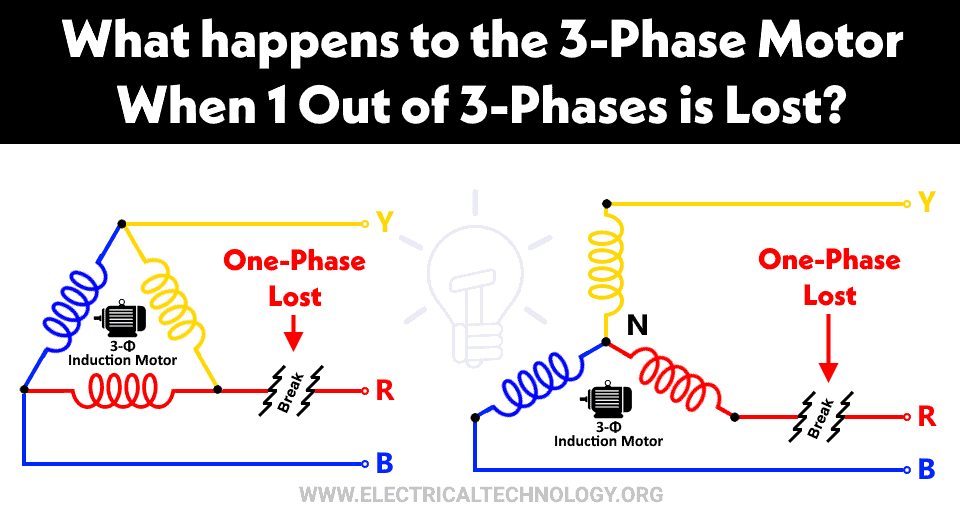 What will happen if One of the Three Lines of Three-Phase Induction Motor is Opened?

If one line of a 3-phase induction motor is accidentally opened or if a fuse blows while the motor is running, the eclectic machine will continue to run as a single-phase motor. The current drawn from the remaining two lines (phases) will almost double (1.7 to 2.4 times) and the motor will begin to overheat. The thermal relays protecting the motor will eventually trip the circuit breaker, thereby disconnecting the motor from the line. If there is no protective circuit, the motor will start to smoke and burn at once.

When one phase disconnected, the remaining produced torque will not be uniform like in a three phase system. It is because the two phase supply still produce the pulsating (instead of uniform like in 3-Φ) RMF (rotating magnetic field) and torque based on the double field revolving theory and if the motor is stopped, it acts like a single phase instead of two phase without RMF. This way, the motor will still run in the same direction but the flowing current in the other two phases will increase (about 1.7 – 2.4 times) and heat up the winding coils which leads to noisy vibrations and may burn the motor in absence of thermal protection. If operated under the rated load, the motor may still operate with reduced speed, hence, it will not handle the desired load.

If the motor is in OFF position and one phase fails, the motor won’t start. And yes, it is still harmful because sometimes the motor starts with even two phases. To avoid serious damage to the motor, it is better to disconnect the machine from the faulty supply lines to make sure the proper three phase supply voltage. But what if the motor is driving and one phase gets lost in the rated or full load, under-rated, higher than rated loads? Let’s discuss these scenarios in detail. 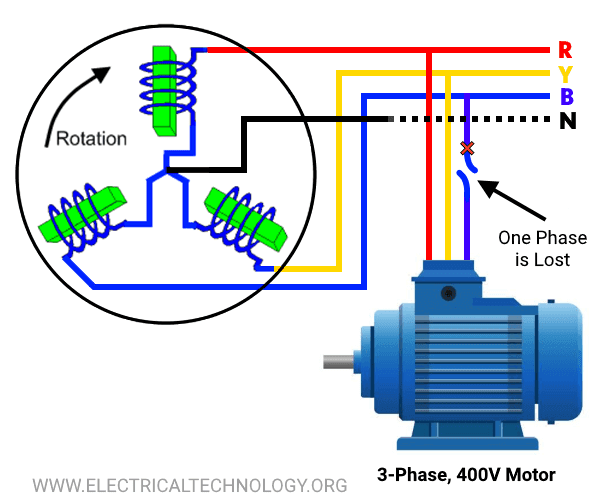 Good to know: A device named Single Phase Preventer (Voltage, Current & CT based) is used to prevent the single phasing or one phase failure in a three phase supply system.

The motor will operate in normal condition without any damage if 33% load (1/3rd of rated load) is connected to the three phase motor. But still, the speed will reduce with noise and vibration as current increases in the remaining two phases which will heat up the internal parts of the motor.

If the connected load is higher than the 33% (1/3rd of rated load), the motor will continue to operate but it will draw extra current in the motor winding and connected phases. It will lead to an increase in the temperature. The thermal relay will disconnect the power supply to protect the motor. If there is no proper protection, the motor may heat up and burn.

If the motor is running at full load or slightly higher than the rated load, the speed of the motor will drop gradually to the zero in less than 30s and the actual time depends on the inertia of load and amount of overload connected to the machine. In case of higher load, it will take some additional time to stop the motor and the excessive amount of current during the operation may lead to burn the motor in absence of fuse or thermal overload relay.

Electrical machines will operate at a considerably reduced speed, under power and produced toque.

Due to the loss of one phase, the current in the other two phases will increase. This causes heat up the motor winding and insulation failure which leads to a short circuit. As a result, the motor may start to smoke and burn.

The three phase electrical machines (motors, generators, transformers) will experience overload with loss of the power.

If the one phase failure occurs prior to starting the motor, it won’t start the machine. If so, it will experience low speed with vibration and may heat up which leads to burning the entire machine.

Why are US Homes Wired Using Solid Wire rather than Stranded Wire?

What happens to the 3-Phase Motor When 2 Out of 3 Phases are Lost?