An Ampere is the unit of electric current. It is named after the French physicist André-Marie Ampère (who is considered the father of electromagnetism) and used in physics and electrical and electronics engineering as a base unit in SI (International System) to measure the electric current.

The unit of Ampere (short form as Amp) denoted by the symbol of “V” is used to measure the flow of electrons between two points triggered by the electric pressure known as voltage. An ampere is defined as:

In a conductor, If one Coulomb of charge (C) is flowing through a point in one second (s), the amount of flowing current past that point is one Ampere (A).

One ampere is one coulomb per second.

Relates Post: What is Volt (V)? Unit in Electrical Engineering and Physics 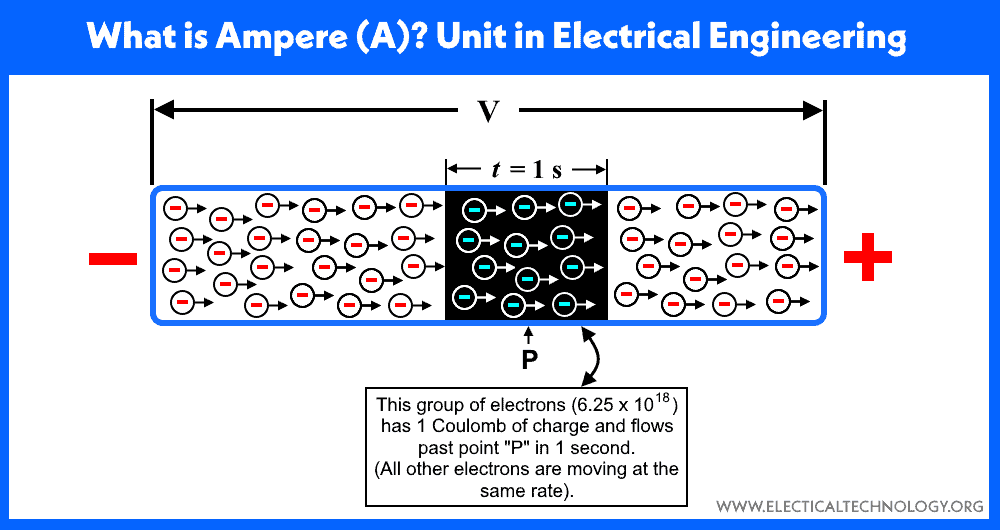 An ampere is also expressed as flow of electron charge (6.25 x 1018 electrons) by one volt of potential difference between two points which allows it to dissipate one Watt of power during the process between these two points.

According to Ohm’s law, if the value of potential difference (i.e. voltage in volts) across a one ohm (Ω) resistor is one volt, the value of flowing current in amperes (A) due to the voltage in that resistor will be one Ampere:

Ampere Equations used for Conversions to the Related Quantities

Amps from Watts and Volts

Amps from Coulombs and time

Amps from Volts and Resistance

How to Measure Ampere?

The tool which is used to measure current in amperes is known as amperemeter or simply ammeter. In both analog and digital multimeters, there is an amps (A) mode for measuring AC and DC currents in amperes.

To measure the flowing electric current in an electrical element (such as resistor, capacitor, inductor, diode etc.), simply put the two leads of the multimeter (in series) and the display will show the exact value of current in amperes. You may follow the step by step guide posted in the previous article as “How to Measure Current using Digital and Analog Multimeter?”.

How to Calculate Amps?

Based on the above given formula and equations for current in amps (for different scenarios), we may calculate the value of eclectic current in amperes as follows.

If the applied voltage across a 4Ω resistor is 12V, find the value of current in Amps flowing in the resistor.

If the value of supply voltage across a 30W led bulb is 12V, Calculate the current in Amps in the light bulb.

Determine the value of required current in amps to glow a light bulb having 500W and 5Ω resistance .

What is the value of electric current in amps if 10 coulombs of charge is flowing through a pint in a conducting material in 5 seconds.

You may use the online tools for Ampere to kVA calculator and kVA to Amperes calculator.

What is Volt (V)? Unit in Electrical Engineering and Physics