What is ELCB? Types, Working, and Application of Earth Leakage Circuit Breaker

ELCB or Earth Leakage Circuit Breaker is a protection device that protects against earth leakage. Initially, the earth leakage circuit breaker were voltage detection devices, now they are switched to current sensing devices. The current ELCB is renamed as RCCB or RCD while the voltage ELCBs are still known as ELCB but they are obsolete.

In this article, we are going to discuss ELCB in detail with both types.

What is Earth Leakage?

The electrical current that flows from the live conductor to the earth through an unintended path is called earth leakage. It may flow between their poor insulation or through a person’s body & cause electrical shock. The consequence of electrical shock may prove fatal if the leakage current exceeds the only 30mA. Therefore, protection devices are used to disconnect the power source when such current leakage is detected

What is Earth Leakage Circuit Breaker?

ELCB or Earth Leakage Circuit Breaker is a type of circuit breaker that is used for protection against leakage current. it breaks the circuit & disconnects the power supply to the load when it senses the leakage current. The earth leakage can cause electrical shocks that can be fatal. 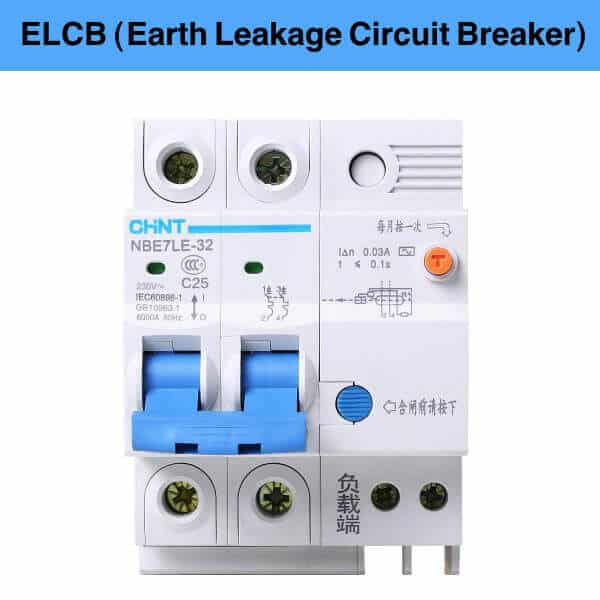 ELCB is a safety device whose main function is to prevent electrical shock. It monitors the leakage current that flows out of the circuit through any unintended path. It cannot protect against overloading or short circuit current.

Under normal conditions, the current from the source flows into the load through the live wire & flows out of the load through the neutral wire. In fact, both currents are equal in amount. If the current leaks through any unintended path, an imbalance between the live & neutral wire occurs. The ELCB can sense the imbalance using a current transformer & break the contacts using an electromagnetic relay. 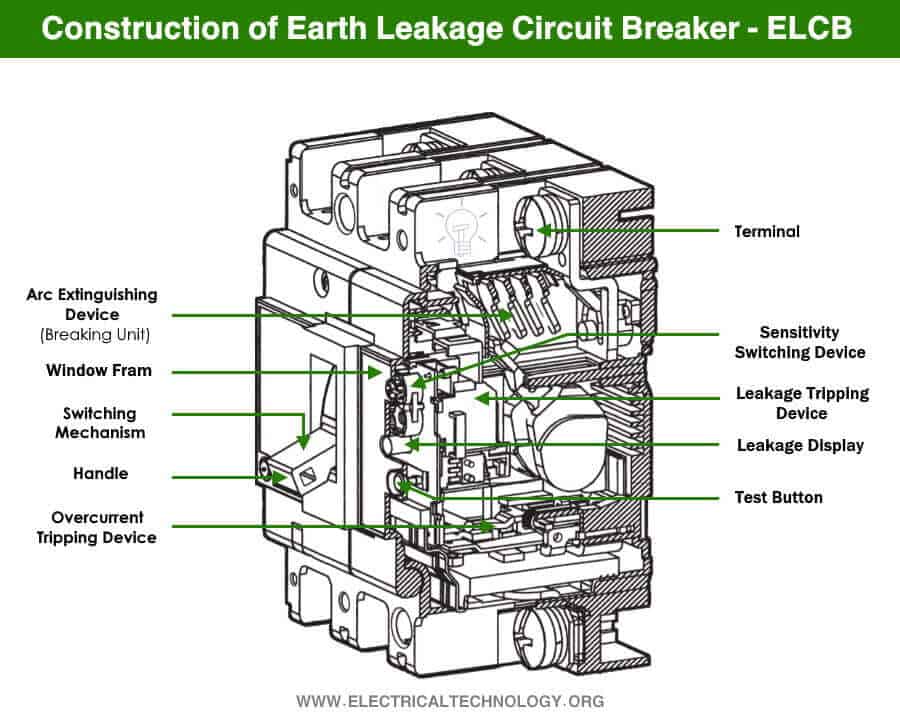 There are two types of ELCB classified based on its operation principle;

Voltage ELCB operates on the voltage level between the earth & the body of the equipment. The voltage difference is used to detect the leakage current & instantly break the circuit.

It has terminals for both phases & neutral on both supply & load sides. It has two extra terminals that connect with the equipment’s body & the earth. These terminals are actually connected with the electromagnetic relay & they play a vital role in breaking the circuit during current leakage.

If the live wire breaks or its insulation fails & comes in contact with the body of the equipment, a voltage difference appears across the terminals of the coil. As a result, the current starts to flow through the coil & it is energized. The relay starts to generate electromagnetic force. When the current exceeds a certain limit, the relay produces sufficient force to pull the latch. By doing so, the latch break opens the contacts & disconnects the power supply to the equipment & prevents electrical shock.

Here are some of the advantages of voltage ELCB

Here are some of the disadvantages of voltage ELCB

It has far more disadvantages than advantages & they are obsolete. Therefore, if you have installed any old voltage ELCBs in your home, replace them with current ELCB or RCCB. They are more efficient, reliable & best at providing protection against any kind of leakage current.

Current ELCB or commonly known as RCD (Residual Current Device) or RCCB (Residual Current Circuit Breaker) is another type of ELCB that breaks the circuit upon sensing any leakage current. It operates on the current difference between the phase & neutral line. The difference appears when the current leaks from the phase line. Therefore, RCCB can provide protection against any kind of current leakage.

RCCB works on the principle of Kirchhoff’s current law, according to which the amount of current entering the load through the hot wire must be equal to the amount of current leaving the load through the neutral wire. The difference between the two currents known as residual current should be zero. If there is a difference then the current is leaking somewhere that causes the imbalance.

RCCB includes a zero-sequence current transformer that has three coils i.e. phase coil, neutral coil & search coil. It is used for detecting the imbalance or difference between two currents. The phase coil & neutral coil is wounded around the toroidal core in such a way to cancel out each other’s flux.

if the currents are equal as should be under normal conditions, the resultant flux will cancel out each other & there will be no induced current in the search coil. suppose, there is a leakage current, the current difference will produce flux that will induce a voltage in the search coil. as the search coil is connected to the relay trip mechanism, it will break the contacts & disconnect the power supply to the load.

Here are the advantages of the current ELCB or RCCB

Here are the disadvantages of the current ELCB or RCCB

Types based on Poles

According to the poles of circuit breakers, the ELCB is classified into three types.

2-Pole ELCB: it is used for protection in a single-phase system. It has 2 ingoing & 2 outgoing terminals having phase & neutral connections.

3-Pole ELCB: It is used for protection in a three-wire three-phase system. It has three ingoing & three outgoing terminals.

4-Pole ELCB: It is used for protection in a four-wire three-phase system.

Advantages and Disadvantages of ELCBs

What is Potential Transformer (PT)? Types & Working of Voltage Transformers