What is a Zener Diode? Symbols, Circuit Diagram, Construction, Working and Applications

What is a Zener Diode?

Unlike an ordinary diode, a Zener diode can and specially designed to operate in the reverse breakdown region. The voltage across the device remains constant during the breakdown region while the current varies.

The symbol of Zener diode resembles an ordinary diode except for the change in a little bend at the edges of the vertical line to make a shape that resembles “Z” as shown in the given figure. 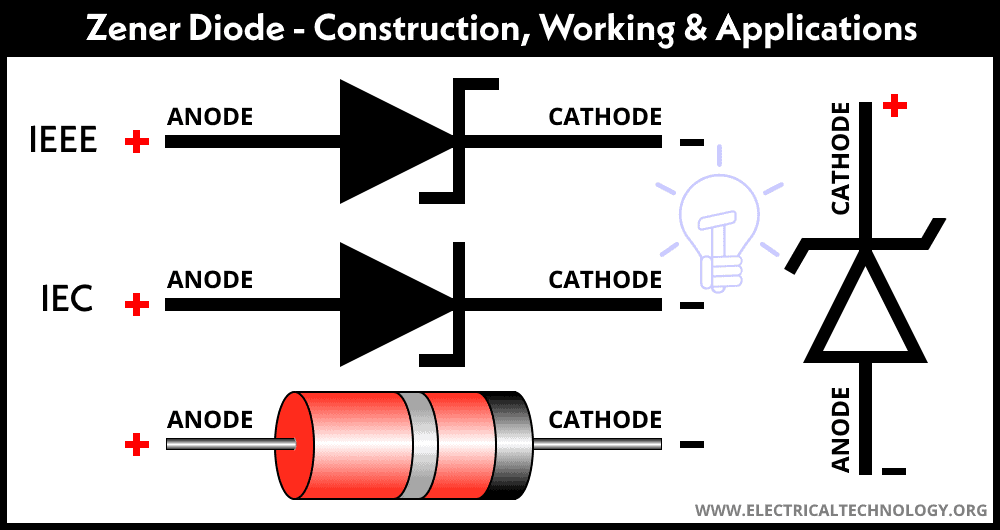 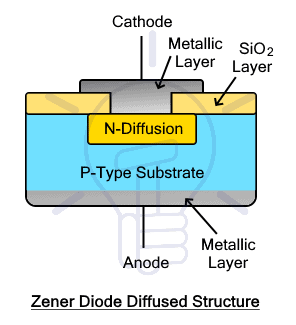 The Zener diode can operate in both forward and reverse bias. In forward bias, it acts as a normal diode with nominal forward voltage drop and a large current flow. While in reverse bias, it blocks current flow until the applied voltage reaches the Zener breakdown voltage. This region is known as the Zener breakdown region and the Zener diode is specifically designed to operate in this region. The current starts to increase with an increase in the applied voltage while the voltage across the Zener remains the same.

The Zener voltage of the diode depends on the doping level which can be adjusted during the manufacturing of the Zener diode. The sudden increase in reverse current in a Zener diode is due to either one or both of the following effects.

This mechanism is known as avalanche breakdown and it is destructive for normal diode as they cannot recover from this. But the Zener is constructed with proper doping levels to perform in this region. However, the avalanche breakdown does not provide a sharp voltage-current as does a Zener breakdown.

The Zener breakdown is a safe method for Zener diode operation and it is specifically designed to operate in this region. The voltage across the Zener diode remains constant while the current increases. Therefore, this region is used for voltage regulation in many applications.

The following figure shows the circuit diagram for connecting a Zener diode which is connected in parallel to the load. 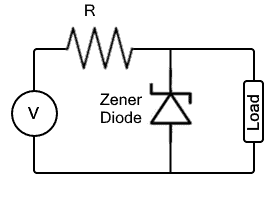 A voltage source is used whose voltage is higher than the Zener voltage of the diode. Whereas a resistor is used in series with the Zener diode and a load as a current limiting resistor to maintain the current.

The total current depends on the connected load. However, the voltage across the load remains constant i.e. the Zener voltage. This is why the Zener is used in various circuits to regulate the voltage.

The Zener diode is available with various specifications and they are used for different requirements. Therefore it is necessary to know the basic specs of a Zener diode.

This is the maximum rated power the diode can tolerate. It is the product of Zener voltage and the current flowing through it. The power ratings of the Zener diode can range between 400 mW and 5 W. 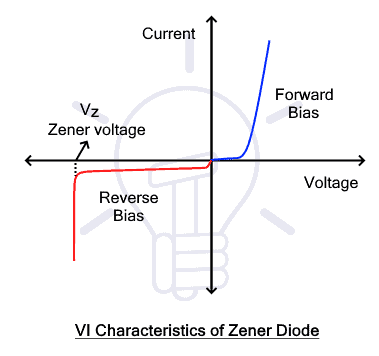 In reverse bias, the diode does not allow current (but only a small leakage current) until the voltage reaches the Zener breakdown voltage. In this region, the current through the diode flows in the reverse direction. The value of the Zener voltage is determined by the doping concentration in the diode.

Advantages and Disadvantages of Zener Diodes

Here are some advantages of Zener diode

Here are some disadvantages of the Zener diode.

A voltage regulator or stabilizer is a circuit that provides a stabilized and constant voltage even if the source voltage fluctuates or spikes. It removes or eliminates the fluctuations or voltage spikes that may damage the sensitive load connected to it.

A Zener is connected in parallel with the load to provide regulated voltage while a series resistor is used to maintain and limit the current flowing through the diode. The load voltage is the same as the Zener voltage VZ of the Zener diode.

Similar to a diode, its impedance changes with the level of the applied voltage. Due to such transition in impedance, it is used as a switch in certain devices.

A clipper circuit is an electronic circuit that is used to change the waveform or shape of a signal. It is done to protect certain sensitive components from over-voltage. A Zener diode is used in such circuits to clip off the peak of certain signals.

As the Zener provide a constant voltage, it is used as a reference signal for comparing voltage signal.

Multimeters are sensitive electronic devices that are often connected in the wrong configuration to high voltage or high current circuits. In such cases, a very high current flow through the meter can damage it. Therefore, a Zener diode connected in parallel is used to divert the excess current and protect the device from damage.