Here are some of the most asked basic Electronics Engineering interview questions. 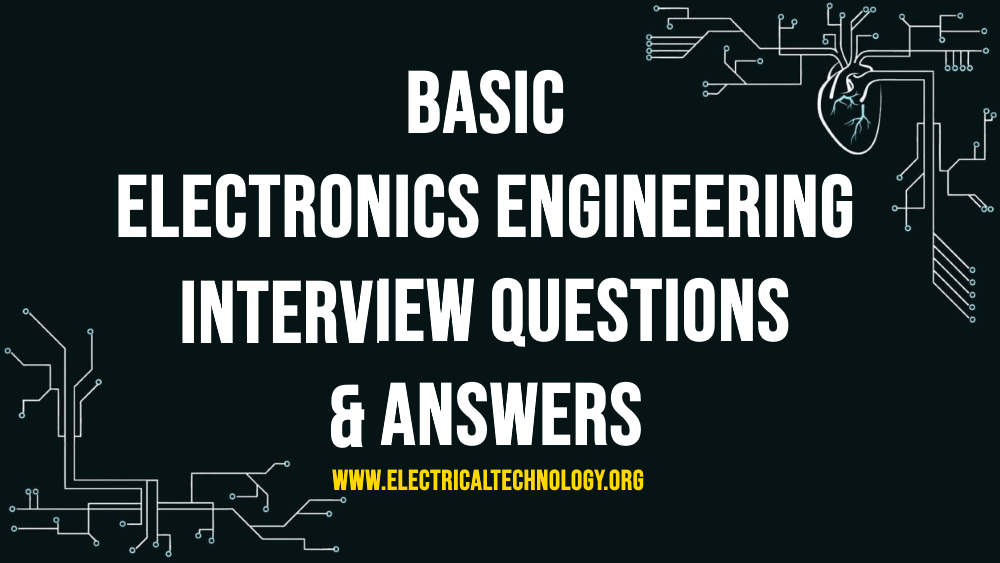 Electronics engineering is a field of engineering which deals with the utilization of active and passive electronic components to design a variety of different analog and digital circuits, devices, and systems.

These devices are implemented in logic circuits, communication systems, robotics, microprocessors and Artificial intelligence to perform useful tasks efficiently and for the betterment of human beings.

It usually deals with low current voltage (compared to Electrical Engineering) specifically between -48v to 48v.

Related Question: What is the main Difference Between Electrical and Electronic Engineering?

Active components are those electrical components which require an external source for its full operation such as Diode, Transistor, Thyristor etc.

A capacitor is a two-terminal electronic component, which stores potential energy in the form of charge. The property or ability of the capacitor to store charge is called capacitance and it is measured in Farad. The stored charge q can be measured using the equation: q = CV

An inductor is an electronic device, which resists the change in electrical current passing through it. It stores energy in the form of the magnetic field when the current pass through it. The voltage drop across an inductor can be calculated using: V = L (di/dt).

If the internal resistance of a voltage source becomes zero the source is said to be an ideal voltage source. And its voltage does not decrease with the increase in current.

Related Post: What is the differences between E.M.F and Voltage (P.d)

The ideal current source has infinite internal resistance. Its current does not depend on its supply voltage.

A practical current source has a large internal resistance. Its supply current decreases with the increase in its supply voltage.

Any combination of batteries and resistances in a linear circuit is equivalent to and can be represented by an ideal current source and a resistor in parallel. You may follow the step by step tutorial for solved examples through Norton’s Theorem.

Any combination of batteries and resistance in a linear circuit can be represented by a signal voltage source and a resistor in series. You may follow the step by step tutorial for solved examples through Thevenin’s Theorem.

A transistor is a three-terminal semiconductor device. It is can be used for amplifying or switching an electrical signal.

In the active region, the transistor acts as an amplifier.

In the saturation region, the transistor acts as a closed switch.

In the cutoff region, the transistor acts as an open switch.

So to use a transistor as a switch, it needs to be operated in the saturation & cutoff region.

Silicon controlled rectifier or thyristor is unidirectional semiconductor device but unlike diode, it has three terminals Anode, Cathode & Gate. The SCR can be switched on & off using the gate input.

A diode is a unidirectional semiconductor device with two terminals called Anode & Cathode. A diode can allow current in only one direction which is known as forward bias.

The voltage drop of a silicon diode is 0.7v and that of germanium diode is 0.3v.

Silicon crystals are more resistant to heat than germanium.

Silicon diode has a high voltage rating than the germanium diode.

Silicon diodes are more preferable because silicon is available in abundant compared to germanium.

BJT stand for bipolar junction transistor and FET is the acronym for Field Effect Transistor.

The input impedance of FET is much higher compared to BJT.

The three terminals of BJT is emitter, base & collector while FET is drain, gate & source

A transformer is a static electrical device which transfers electrical energy from one circuit to another circuit without any physical connection instead it uses the principles of electromagnetic induction. A transformer either increase or decrease the input voltage & current.

Related Post: What is the difference between Power Transformers and Distribution Transformers?

An oscillator is an electronic circuit which generates a periodic AC signal from a DC source. An oscillator has no input. The output of oscillator can be sinusoidal or Square or a triangle wave.

The transfer of information from one place to another place using some sort of medium is called Communication. The information could be in any form such as a sound or visual or electrical signal etc.

A signal consisting of significantly lower frequency (up to 10 kHz) is known as a baseband signal.

The baseband signal cannot be transmitted directly through the antenna. They are transmitted using copper wire or fiber optics etc.

A signal consisting of significantly higher frequencies (Higher than 100 kHz) is known as Passband or BandPass signal. Bandpass signal does not contain any frequency lower than 100 kHz.

Bandpass signal can be directly transmitted through the antenna.

The process in which one of the characteristic parameter (amplitude, frequency, phase) of the carrier signal varies linearly with respect to message signal’s amplitude is called modulation.

Modulation converts a baseband signal into a passband signal making it suitable for long distance communication using an antenna.

Antenna size also depends on the frequency of the transmitting signal, so the modulation allows us to use a small size antenna.

Using Modulation we can assign different frequencies to different signals which allow us to send multiple signals using the same medium without interference.

The demodulation is a process of extracting the information or message signal from the received or modulated signal.

Whereas, Digital modulation is further divided;

AM signal can travel long distances as compared to FM signals.

As we know that a transmitted signal loses its power when it travels long distances. To retain and maintain its full power, the signal is boosted through a device known as a repeater for long distance communication.

Usually, a repeater retransmits the identical signal but it may change the medium or frequency of the signal according to the need.

Digital signal is a signal which has discrete time and discrete amplitude.

Discrete signal often known as the discrete-time signal is a signal, which has discrete time but continuous (it can have any value) amplitude.

Sampling is a process of converting a continuous time signal into a discrete time signal but not a digital signal.

Suppose the maximum frequency of the analog signal is fmax then the Nyquist criteria suggest that the sampling rate for this analog signal must be 2fmax or greater.

Aliasing is a signal effect related to sampling. When a signal is sampled at a sampling rate less than the required rate, the signal becomes indistinguishable from other signals and after reconstruction, the signal does not look anything like the original signal. This effect is called Aliasing.

A Filter is an electronic circuit that removes specific or unwanted frequency components from a signal. The types of filters are:

The cutoff frequency is taken at -3db (Half power) of the maximum amplitude.

The passband is the range of frequencies that can be passed through the filter without any attenuation.

The stopband is the range of frequencies that are attenuated and cannot be passed through the filter.

The notch filter is a type of band stop filter with very narrow stop band.

A digital logic gate is an electronic device which implements the Boolean function. The boolean function performs a logical operation on one or more than one binary numbers.

There are seven basic logic gates. NOT, AND, OR, NAND, NOR, XOR, XNOR gate.

Derived logic gates are those gate which can be made from these three basic logic gates NOT, AND & OR.

NAND, NOR, XOR & XNOR are derived logic gates. Basic logic can be combined together to make these gates.

A universal gate is a logic gate which can be solely used to implement any kind of boolean function. There are two universal logic gates namely NAND & NOR gate.

In digital logic, a Specific level of voltage is represented by binary numbers i.e.1 or 0 in other words, True or False respectively.

Latch and flip-flop are memory devices with two stable states. They are used for storing data (states) in sequential logic. The states are controlled using one or more than one control signals. It can store one bit of data.

The level trigger means that the device will change its state according to the previous state, next state input and the level (stable 1 or 0) of the control signal.

Combinational logic does not have a memory that is its current output depends only on the current input.

While sequential logic has a memory and its current output depends on the previous output and current input.

These two Digital binary adders are differentiated based on the carry determining technique.

CLA adder operates much faster than ripple adder as it bypasses many stages.

Operational amplifier often known as op-amp is an active voltage amplifying component. It can amplify voltage based on the difference of voltage between its two inputs.

The input impedance of op-amp between its differential inputs is very high usually in Mega Ohms to Tera Ohms (ideally infinite). That is why the input current of an op-amp is very low (almost negligible)

The output impedance of an op-amp is very low (ideally zero).

Even More Electronics Engineering Questions and Answers with Explanation

Some of the electronics engineering interview questions may be more casual like “why you choose this field?” etc. but we are covering more technical question.