What is a Consumer Unit?

A consumer unit (CU) also known as panel box, breaker box or fuse box is a type of a distribution board (aka electric panel, breaker panel, panelboard or main breaker-box or main service panel) which is used to distribute and fed the electric power to the sub-circuits and final sub-circuits especially in residential and domestic applications.

In the UK and EU, the consumer unit is used to provide single phase, 230V AC supply to the load points through a properly protected system. The CU contains multiple protective devices such as isolator switches, circuit breaker and fuses to safely carry the electric power through cables and wires to the load points such as electric water heaters, air-conditioner, electric motors and lighting circuits etc.

The following different types of distribution and consumer units are used for single phase supply in residential applications.

In this tutorial, we will be showing how to wire a single phase consumer unit for 230V with and without RCD’s according to IEC. We will be using the IEC wiring color codes which is also applicable to EU, UK and other countries. For proper explanation, the Old UK wiring color codes (prior 2004) are also used which is still applicable in some of the countries such as India, Pak, UAE, KSA etc. 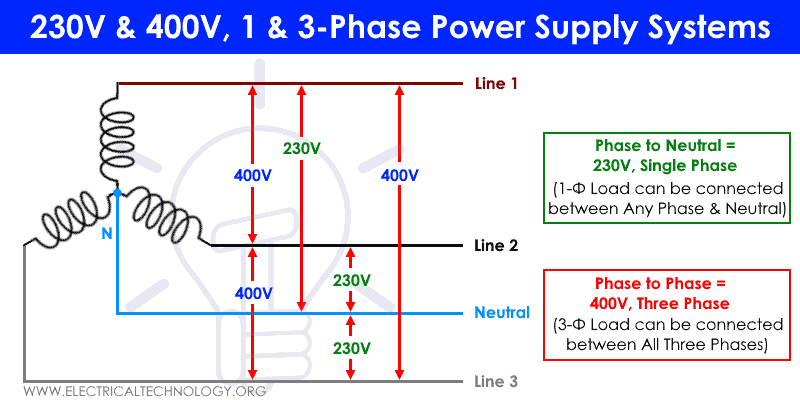 For example, In case of failure of one RCD in an MCB + RCD’s consumer unit, the rest of the circuits protected by other RCD’s and CB’s will work fine.

On the other hand, another possible (but costlier than the RCD+MCB) solution is to protect each circuit through RCD + RCBO in accordance with 17th Edition. In this scenario, If a single RCBO trips out, only the related circuit will power OFF and the rest circuits will work properly. In addition, you may know the Difference Between MCB, MCCB, ELCB & RCB, RCD or RCCB/RCBO Circuit Breakers for better understating of the functions of RCD circuit breakers.

How to Wire a Single Phase Consumer Unit with RCD?

According to IET (Institution of Engineering and Technology) wiring regulations: 17th Edition (BS 7671:2008 – 1: 2011), an RCD protection must be provided in the consumer unit except smoke and burglar alarms system.

In both (MCB and RCBO) cases, almost all the consumer units up to 100 Amps (including the basic 63A CU) and distribution boards up to 200 Amps included the MCB’s and RCD’s mounted on DIN rail in the panel board.

In a single phase 230V AC supply system, the main power supply from the secondary side of the distribution transformer (Primary Star or Y, and Secondary as Delta where voltage between any line and neutral wire is 230V, 1-Φ) is connected to the energy meter. There may be a main fuse between the utility pole and energy meter (kWh meter) to isolate the power supply while troubleshooting / installing a kWh energy meter.

In other words, the main switch (as MCB) will work properly no matter if the two wires (as phase and neutral) connect to the down or up side terminals. But this is not the case in case of residual current device (RCD). The output of the MCB must be connected to the Input terminals of RCD. In addition, The neutral wire (both Input & Output) should be connected to the “N” terminal mentioned on the RCD nameplate.

Note: We have used “Brown” for Phase, “Blue” for Neutral and “Green or Green with yellow stripe ” for earth wires according to IEC, UK and EU wiring color codes. You may use the local and specific area color codes if applicable. 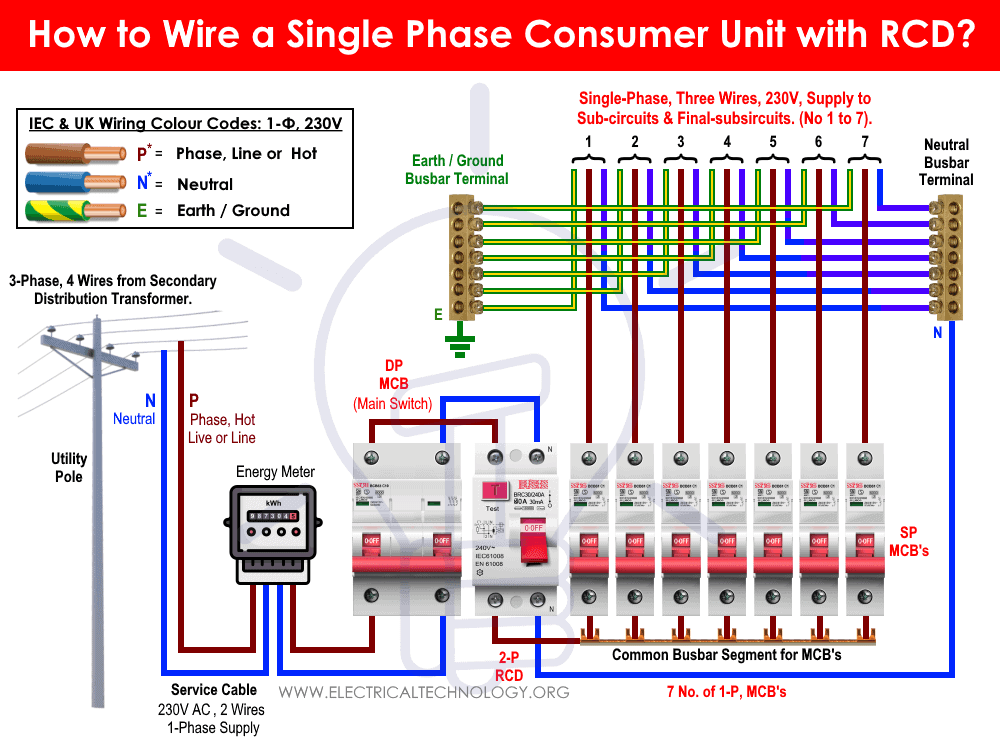 How to Wire a Single Phase Consumer Unit without RCD?

This is the same wiring tutorial as mentioned above except there is no RCD used in the CU. In other words, the main power supply is connected to the SP circuit breakers through the main switch  and the rest load circuits and outlets are connected via Phase, Neutral and Earth wires. 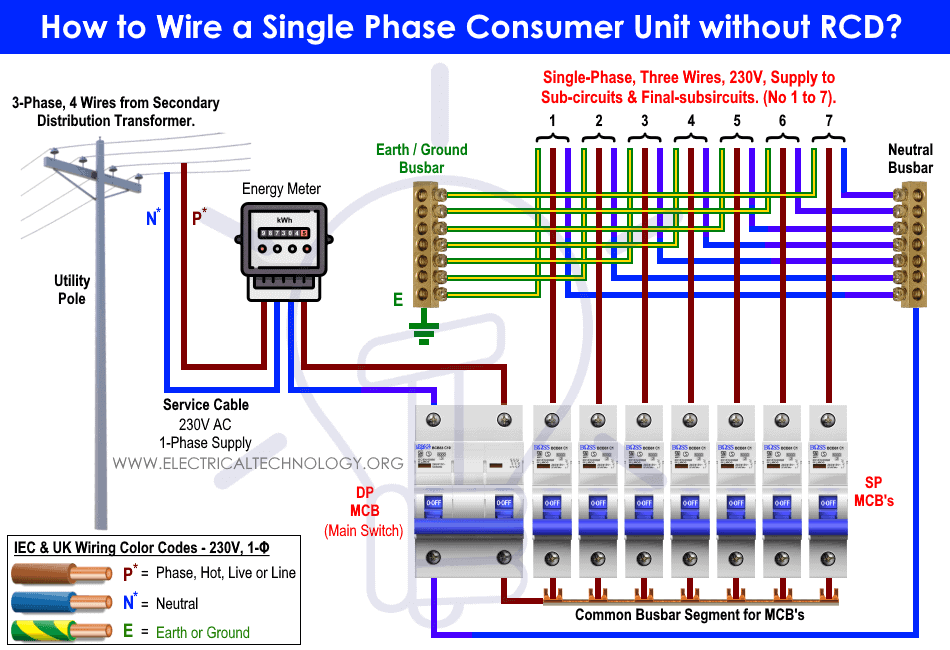 P.S: As mentioned before, RCD protection is must in the consumer unit according to the IEC and 17th edition.

The following fig shows the basic consumer unit wiring installation with and without RCD protection for 230V single phase AC supply according to the Old UK (prior 2004) wiring color codes. As these wiring color codes are still applicable in many countries such as India, Pakistan, United Arab Emirate, Kingdom of Saudi Arabia, Qatar, Kuwait and other Arab countries, they may follow these wiring color codes. For example, the “Red” for Phase, “Black” for Neutral and “Green” for earth wires. 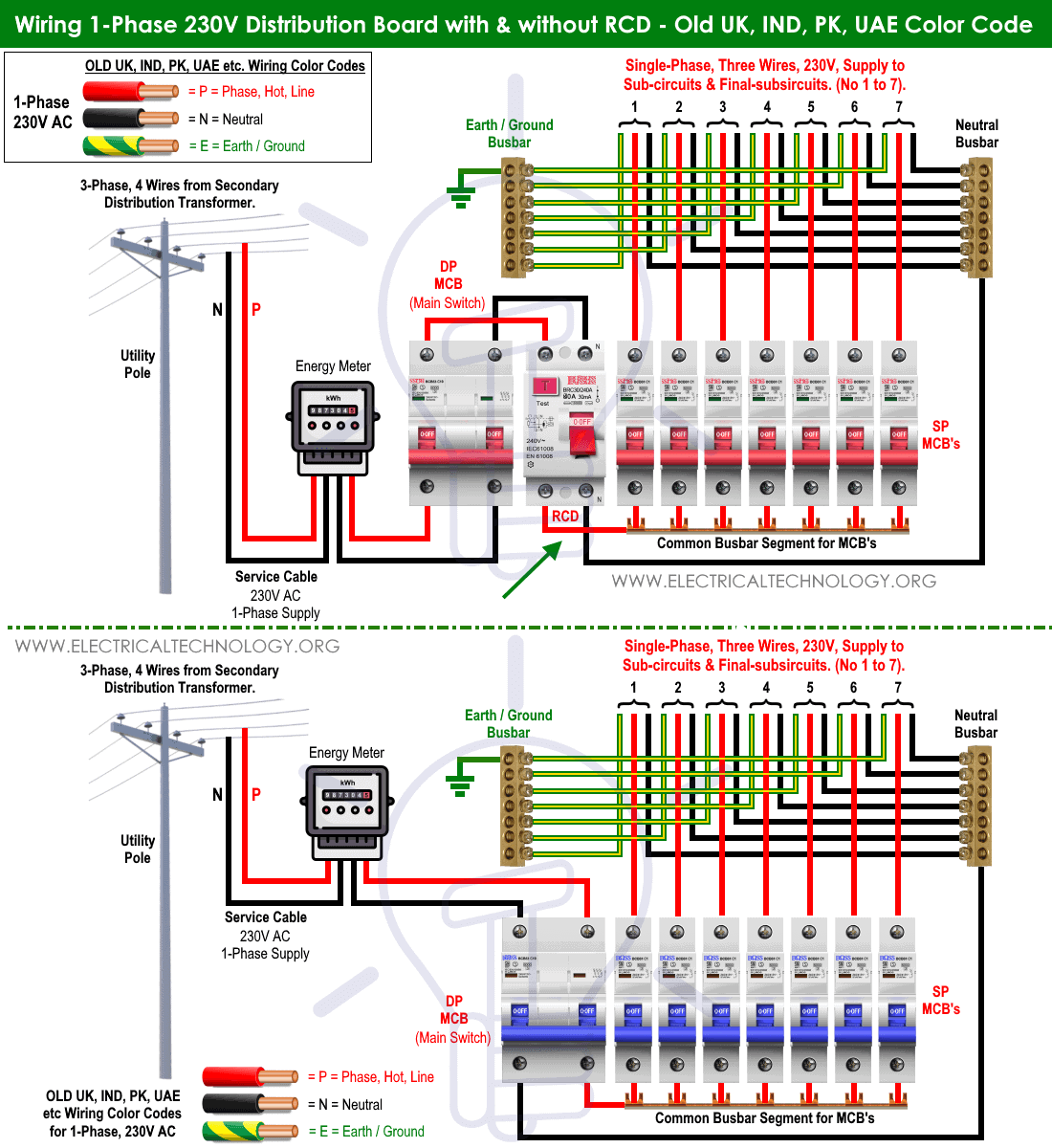 The following fig shows how to connect single phase load points such as LCD TV, LED Lamp, Ceiling Fan and standard socket outlet etc. in a single phase 230V consumer unit and distribution board. As shown, all the load points should be directly connected to the 230V AC supply via Phase, Neutral and Earth/Ground wires.

As shown in the fig below, all the load circuits are protected by Main MCB –> RCD –> and CB circuit breakers. You may connect and install additional RCBO and RCD’s as per code and requirement. 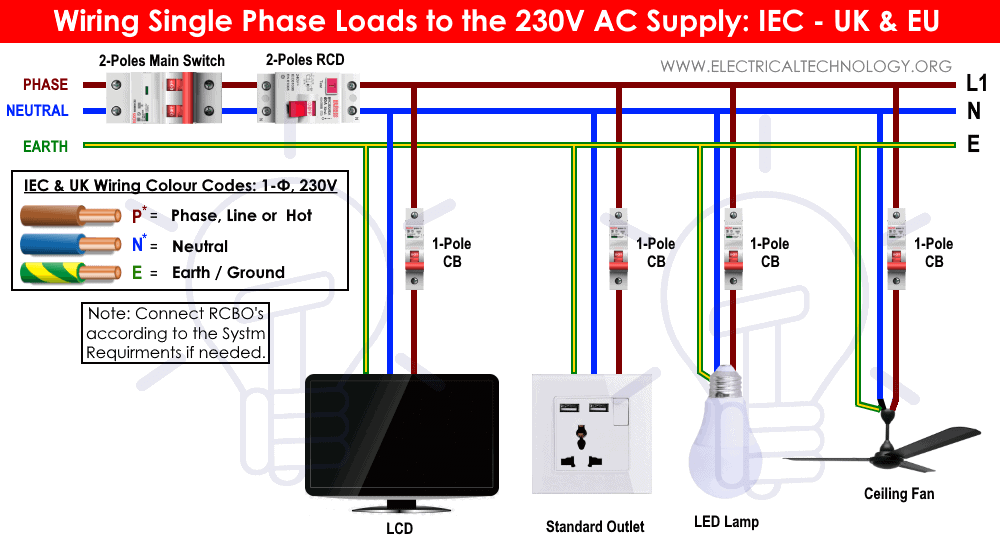 An introduction to Maximum Power Point Algorithms in PV Systems