The dual split load three phase distribution board is used to supply the electric power supply via main switch and separate RCD/RCCB for each section. This way, the same distribution board can be used to split the load points via multiple RCD’s. In addition, Some of the RCD’s can be used for three phase 400V circuits in commercial and industrial applications while the other RCD’s can be wired for single phase 230V appliances and residential applications.

The dual split load or simple split load distribution boards provide high integrity protection having multiple advantages. For example, If first RCD trips because of fault, the whole building will not suffer with immediate darkness i.e. the rest of the circuits will work fine as other RCDs are not depended on the first one. In case of single RCD with fault, the whole area will face a complete power breakdown.

A distribution board (aka main breaker box, electric panel or panel board) is a combination unit of protective devices (such as main switch, MCB, MCCB, RCD, RCBO, Isolator, fuses and switches etc.) used in commercial (as industrial) and domestic (as residential) applications to safely control and provide electric power supply to the load circuits and appliances.

We will never repeat again and again as we discussed the difference between single phase and three phase power supply as well as balanced and unbalanced loads system in the previous posts and wiring tutorials. For basic revision, following are the common residential and commercial voltage levels in the United Kingdom, Europe and other countries that follow the IEC rules such as UAE, KSA, India, Pakistan, South Africa, Philippine etc.

Following is the typical power supply distribution system for both single phase and three phase supply voltage in the UK, EU and other countries which follows IEC and UK standards.

In short, 3-Phase, 400V can be achieved by three lines (L1, L2, L2). Keep in mind that Neutral is not always necessary in the three phase wiring systems. Please check the previous wiring diagrams for more details. In addition, Almost all the metallic bodies of the appliances must be connected to the Earth/Ground wire to single or multiple points via earth continuity conductor to the earth plate buried in the soil. (for more details, check the previous post: Electrical Earthing – Methods and Types of Earthing & Grounding

Please note that we have multiple wiring configuration for three phase split load distribution board i.e.

How to Wire a 1-Φ Load in a Split Load Distribution Board?

In the following dual split load distribution wiring diagram, there are a total 24 numbers of 1-P MCB’s are wired for single phase 230V load circuits i.e. ceiling fan, air-conditioner, and lighting points etc. via three wires (Phase, Neutral & Earth). You may use RCBO’s or two poles MCB’s based on the system requirements if needed.

The whole circuit is divided in two parts i.e. the 12 Nos of 1-Poles MCB’s (upper portion) are controlled and protected by first RCD (left side) and the rest 12 No. of MCBs (lower portion) are wired to the second RCD (right side). Both the RCD’s are protected and controlled by the 3 or 4 Poles MCB/MCCB main switch as an isolator.

Keep in mind that there are separate Neutral busbars for each section protected by a single RCD. In addition, a common Earth busbar neutral can be used for both RCBO’s and load points connected to the 1-P, MCB circuit breakers.

How to Wire a 3-Φ Load in a Split Load Distribution Board?

How to Wire Both 1-Φ & 3-Φ Load in a Split Load Distribution Board?

The following wiring diagram shows the combination of both single phase 230V and three phase 400V, split load distribution board. Single phase load circuits i.e. fan, light bulb and other residential devices can be directly connected to the phase, neutral and ground/earth wire.

The three phase load points i.e. motors, water heaters and power circuits can be directly connected to the three lines + earth wire where Neutral is optional and depends on the design of machine and appliance. 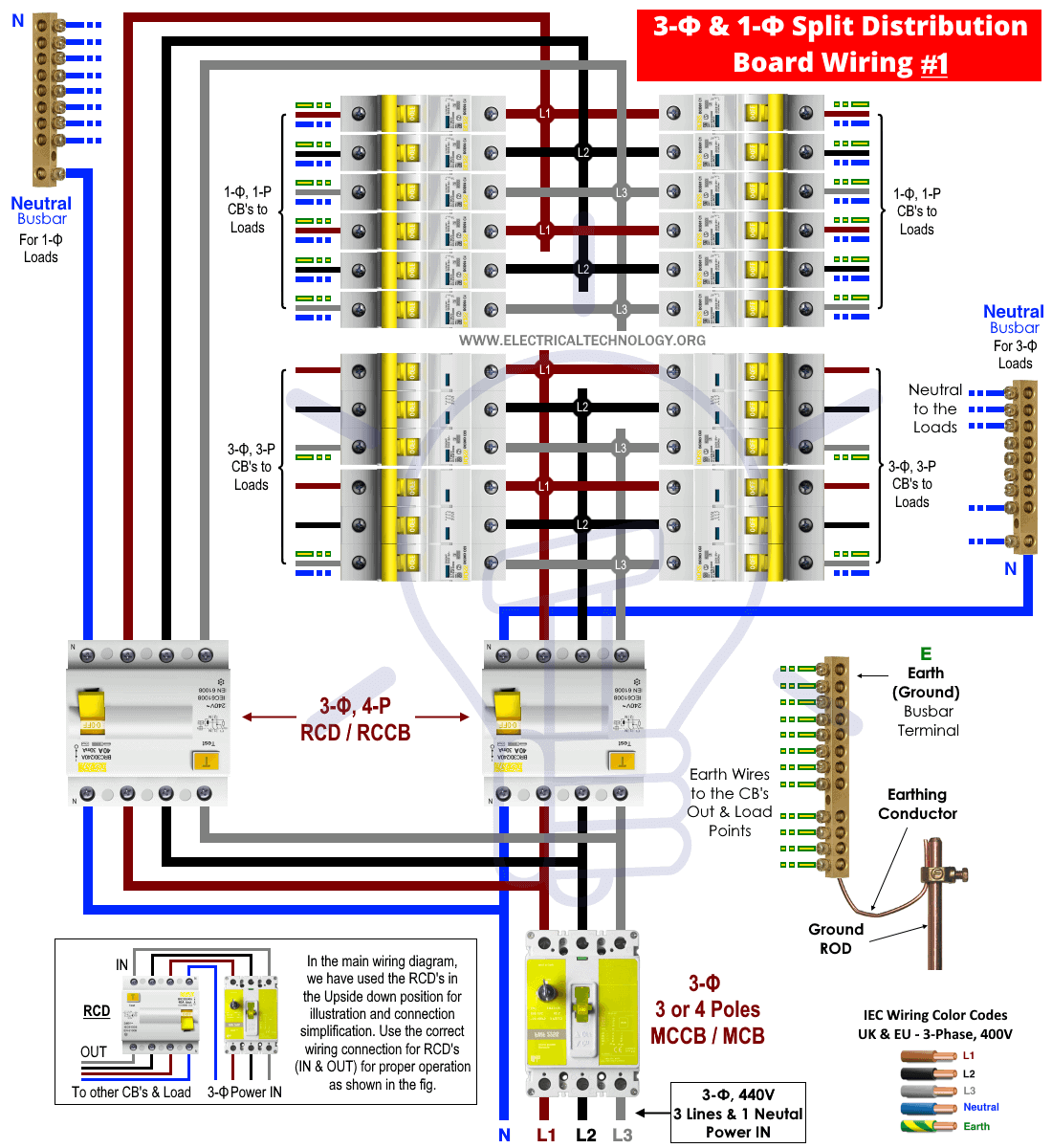 In the main wiring diagram. we have used and installed the RCD’s in the Upside down position for illustration and connection simplification. Use the correct wiring connection for RCD’s (IN and Out) for proper operation as shown in the fig.

As most of other countries like KSA, UAE, IND, Pak etc. also follow the same level of voltages for both single phase and three phase as IEC but some of them still use the old United Kingdom Wiring color codes (prior 2004). Moreover, we get queries from readership to include the wiring diagrams in RYB wiring colors codes. So here is the wiring of a split load distribution board for 1-Φ & 3-Φ circuits and CB’s according to the old UK wiring color codes.

In a three phase split load distribution board, two RCD’s are used to protect and control single phase breakers and associated load points and three phase MCBs and connected load circuits. As shown in the below wiring diagram, we have used two RCD’s, i.e. the first one for 400V circuits and the second one for 230V circuits.

In the following fig for split load distribution board wiring, the protection and control to the single phase and three phase load circuits are as follows.

We have used the following IEC wiring color codes for 400V three phase supply voltage applicable in the UK & EU.

How to Wire a Three Phase, 400V Distribution Board? IEC & UK

What is The Difference Between Transistor & Thyristor (SCR)?