Today cell phone chargers come with different power supply in the market. In this project we will be making a circuit that will be used to get 5 volts regulated DC supply from 220 volts of AC supply. This circuit can also be used as power supply for other devices, breadboards, microcontrollers and ICs.

There are basically four steps involved in making a cell phone charger. First step is stepping down the 220 volts of AC supply into small voltage. Second step involves rectification of AC into DC by using a full wave bridge rectifier. Since the DC voltage obtained in second step, contains AC ripple which is removed using filtration process. The last step is the voltage regulation in which IC 7805 is used to provide 5 volts regulated DC supply.

9-0-9 is a center tapped step down transformer. In a center tap transformer, a wire is connected exactly at the midpoint of the secondary winding of the transformer and kept at zero volts by connecting it to neutral current. This 9-0-9 transformer converts 220 volts of AC supply to 9 volts of AC.

This type of step down transformer is mainly used in rectifier circuits by converting AC supply voltage into DC voltage. 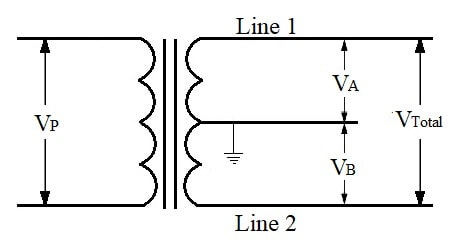 From the above diagram it can be seen that we obtain two voltages VA and VB from three wires and the neutral wire is connected to the ground hence this transformer is also called as two phase three wire transformer.

Let us consider one time period (T) of the AC wave. The first half of the input AC cycle (0 to T/2) is positive whereas the second half is negative (T/2 to T). We want to convert the negative half to positive half.

So we keep the first half of the cycle as it is and convert second half into positive half using four diodes (D1, D2, D3 and D4) as shown in the circuit diagram. The diodes conducts only in forward bias condition and do not conduct in reverse bias condition.

This full wave bridge rectifier has various applications. It is mostly used in circuits like powering motors or LED’s. It is also used in supplying steady and polarized DC voltage in electric welding. It is also used in detecting the amplitude of the modulating radio signals.

After the rectification of AC, the output we achieve is not a proper DC. It is a pulsating DC output with a high ripple factor. We cannot feed this output into our cell phone as it as damage our device easily as it is not a steady state DC supply.

Let us calculate the capacitance value which should be used for filtration.

The capacitance can be calculated using the formula: C = (I*t)/V, where

Since the input AC voltage is 50 Hertz therefore output waveform after rectification will have twice the frequency of the input AC supply. Therefore frequency (f) of ripple is 100Hz.

The output to be fed to voltage regulator is 7 volts (5 volts dc output + 2 volts more than required) which is to be deducted from the peak output voltage. The 9-0-9 transformer gives the 9 volts RMS value so peak value will be √2 x RMS voltage. In one cycle we are using two diodes. The voltage drop across one diode is 0.7 volts therefore 1.4 volts across 2 diodes. So finally

IC 7805 is voltage regulator which gives regulated 5volts DC output. The operating voltage of IC 7805 is 7 volts to 35 volts. Therefore the minimum input voltage supplied should be at least 7 volts. The output voltage range is 4.8 volts to 5.2 volts and the current rating is 1 Amperes.

For instance, if the input voltage is 12 volts and output voltage is 5 volts with output current of 500m Amperes. Then heat generated is (12V – 5V) x 0.5mA = 3.5 Watts. So a heat sink can be attached which can absorb heat of 3.5 watts of power to avoid the IC getting damage.

7805 voltage regulator IC signifies two meanings: “78” means positive and “05” means 5 volts, hence this IC is used to supply positive 5 volts DC supply. This IC has just 3 pins: one for input, second for ground and third for output. A capacitance of 0.01µF is connected across output of this 7805 voltage regulator to element the noise generated due to the transient changes in voltage.

By understanding the above procedures you can design your own cell phone charger of desired output. Necessary changes will be required in transformer ratings like you need to choose transformer which can step down to appropriate voltage.

The rectification process will be similar as it will just convert negative half into positive half. The calculation for the capacitor required in the process of filtration must be calculated properly especially for mobile phone charger. The difference between the input and output voltage of the voltage regulator 7805 must be kept into consideration and heat sink should be designed accordingly.